SYRACUSE — Brent Axe, host of “On the Block” on ESPN Radio 1260 (WNSS) announced on his show shortly after 5:00 this afternoon that he will add hosting duties with the Buffalo Bills Radio Network starting this fall.

Axe says he’ll be hosting a three-hour pre-game show, the halftime show, and he will serve as locker room reporter for the post-game show.

Since WNSS is a Buffalo Bills affiliate, Axe points out that his local listeners will be able to hear his halftime and post-game broadcasts in Syracuse.  The pre-game shows will air in Buffalo only, but listeners outside of the market will be able to listen online at www.97rock.com. 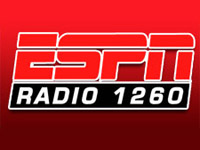 Axe tells CNYRadio.com that joining the Bills “is an absolute dream come true for me as well and I couldn’t be any more excited. The reason I got into this was to be apart of that broadcast. It is so surreal that has come true now. I am really humbled by this but it also shows that if you work your [behind] off good things will happen.”

Axe started his career at Utica’s WIBX, first as a producer, and then later as host of the station’s long-running SportsWatch program.  In 2002, Axe returned to his native Syracuse, hosting “On the Block” at Clear Channel’s WHEN.  That lasted until November 2006, when Axe was one of many Clear Channel staffers affected by layoffs in several markets across the region.  He soon resurfaced with his “On the Block” sports blog at syracuse.com, and returned to radio at WNSS last year.

Axe says he’s got another big announcement coming later this week — but on the air this afternoon, he wouldn’t say exactly which day he would be able to make that announcement.  He’s only promising the announcement will be made before the week is over.

← POTW: Radio & TV at the Utica Boilermaker
Jazz on the Bird Replaces Librizzi at WAER →