UTICA-ROME — There are a handful of personalities in the Utica-Rome market who’ve been around for a long time.  But which one has enjoyed the longest run at just one station for their entire career?  It’s none other than WOUR’s Genesee Joe. 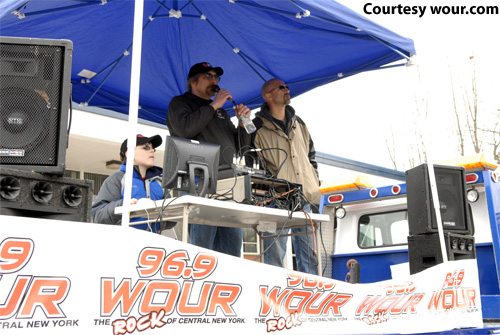 Here’s Joe alongside Dave Frisina during America’s Greatest Heart Run & Walk in Utica back in March.  This summer, Genesee Joe is marking 17 years at WOUR — the one station he’s worked at the entire time he’s been in radio.

Even though there are others in the market who’ve worked at their current stations for a longer amount of time, Joe points out they’ve all worked at other stations at some point in the past.  He’s pretty certain nobody else in the market has been at one station for their entire career longer than his time at WOUR… and we can’t think of anyone who could disprove his theory.

Got Pictures?
We’re always interested in a look at what’s happening today at your station, or a glimpse back at something notable from the past.  Send those pictures to cnyradio@cnyradio.com.  There’s a new POTW every Friday.