SYRACUSE — It’s been two weeks since Brent Axe’s afternoon talk show “On the Block” on ESPN Radio 1260 (WNSS) started simulcasting on Time Warner Cable Sports (channel 26 in most areas).  If you haven’t had a chance to catch “The Axeman” on TV yet, here’s a look. 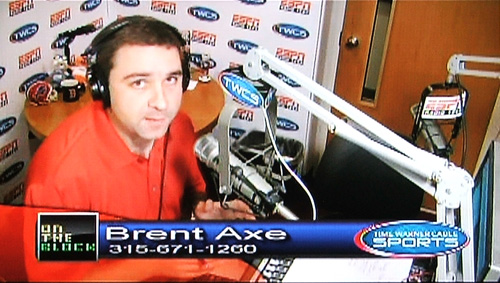 That’s a shot from the first few minutes of Axe’s show yesterday afternoon.  The graphic with Axe’s name and number occasionally changes to show his e-mail address, or to show the names of listeners who call in to talk with Axe over the air.

Last month, Axe told us he was “very excited” to see how the TV simulcast will benefit the show.  Most obvious, it give fans the chance to DVR the show and listen or watch later.  Secondly, we’re not sure exactly how far Time Warner Cable Sports reaches out, but if it’s seen on all the same cable systems which get Time Warner’s News 10 Now, that means Axe can be seen/heard in areas far beyond the range covered by the WNSS radio signal.

On a side note, who’s the guy sitting next to Axe in the “thumbnail” photo for this story on the front page?  That’s Ian Harmand, filling in as producer because regular producer Kevin Ware was off.

Got Pictures?
We’re always interested in what’s happening today at your station, or a look back at something notable from the past.  Send your pictures to cnyradio@cnyradio.com or use the Contact Form.