UTICA-ROME — Today is the 20th anniversary for Regent AC Lite 98.7 (WLZW).  For today’s Picture of the Week, we’re re-running an old POTW from the original CNYRadio.com, when the station celebrated 15 years on the air.  Also Inside: a rundown of the personalities-from-the-past who will be returning to the Utica airwaves for the “20th Anniversary Reunion Work Escape Weekend,” and an announcement from your CNYRadio.com Editor. 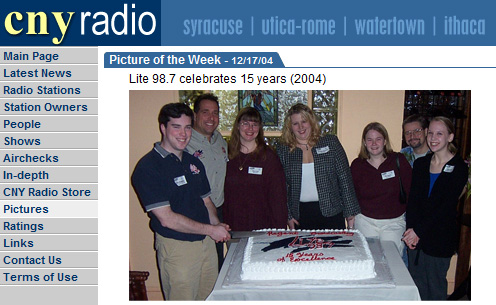 As reported earlier on CNYRadio.com, WLZW has been running liners from various “voices from the past,” including longtime PD/morning man Randy Jay, former middayer Jeanne Ashley, former afternoon driver JP Hastings, and Naughton.

Current PD Eric Meier tells CNYRadio.com, “Lite 98.7 has been an important part of Central New Yorkers’ lives for 20 years. It’s been a real treat to be able to reminisce with our listeners, bring back some great memories from the past, and best of all award an amazing 20th Anniversary Prize Package.”  The grand prize winner for that package — which includes a week-long Caribbean cruise — will be selected today.

And a special treat for listeners on the “20th Anniversary Reunion Work Escape Weekend” follows — Meier tells CNYRadio.com all the above-mentioned personalities have graciously agreed to lend their voices for complete airshifts.  Here’s the schedule:

We’re always interested in a look at what’s happening today at your station or a unique shot from the past.  There’s a new Picture of the Week every Friday.  Send those shots to cnyradio@cnyradio.com or upload via the Contact Form.

Letter from the Editor

It’s with much excitement — but also in the interest of complete journalistic disclosure — that I am announcing that I have accepted an offer to return to the WLZW air staff on a part-time basis.  Anyone else who has ever left broadcasting can probably agree — after you leave it, you miss it.  While I have no plans to return to the business on a full-time basis, I remember how much I enjoyed my start as a part-timer, and I am looking forward to returning to that capacity.

Before accepting the offer, I did thoroughly consider the impact this affiliation may have on the coverage here at CNYRadio.com.  That’s why I posted an open poll for you, the readers, to see if you would approve.  An overwhelming majority of you voted for the option “Yes, it would be OK, but only if there is full disclosure,” and I thank you for your support.  My promise for full disclosure is the primary reason for this open letter to you today.

Regarding the journalistic integrity of the site, and to ease any concerns from the small number of readers who voted against my working in radio, I submit the following for your consideration:

Thanks again for your continued readership of CNYRadio.com, and for your support, whether it be in supplying news tips, helping with the Station Wiki, or both.  The e-mail box is always open for your comments, questions or suggestions.