For the first Picture of the Week of the new year, we’ve got a double feature: another reader-submitted memory of the once-mighty WRUN, along with a rather impressive home studio setup.

Both of these pictures come courtesy of Mark Fuller, who was inspired to write in after our December 18th POTW, which featured some vintage literature trumpeting the launch of WRUN.  (The station signed on in 1948 and kept the same call letters until just last month, when it became WUTI as part of a change in ownership.)

Mark tells CNYRadio.com he found this classic WRUN “License to Listen” bumper sticker at a garage sale.  Fuller says, “The person at the garage sale said its been stuck on the wall of the garage for at least 30 years. When I asked how much they wanted for it, all they said is, ‘you can have it if you can get if off the wall.’ Some of the bottom at 1150 didn’t make it, but its pretty much all there. I have never seen another one like it. I’m sure they were stuck all over the bumpers of 60’s and 70’s cars running around this area during that time period.”

Mark says this vintage treasure is now on display inside his home radio studio… and he was gracious enough to include a snapshot of that as well. 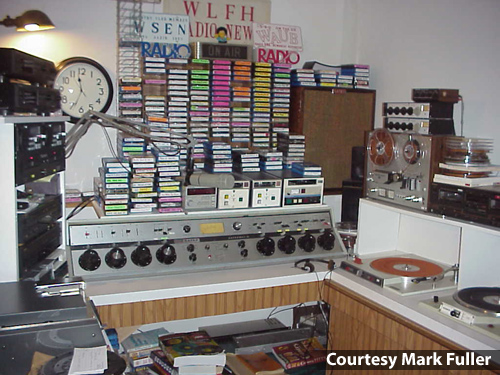 Mark tells us, “The board is a Gatesway II solid state. Theres cart machines, reel to reels, turntables, and other equipment that is more up to date, but I enjoy putting together my college radio shows on [Hamilton College’s] WHCL and [Utica College’s] WPNR out of this mono-studio from the 70’s. Takes me back to my commercial radio days of the late 60’s, 70’s, 80’s and early 90’s.”

Look closely and you’ll notice other items of nostalgia from stations like WLFH, WSEN, and WAUB.

Our thanks to Mark Fuller for sharing his setup this week.  (Incidentally, he’s a 2-time contributor for POTW…)  We’re always interested in a look at what’s happening today at your station, or a glimpse back at something or someone notable from the past.  Send those shots to cnyradio@cnyradio.com or upload them through the Contact Form.  There’s a new Picture of the Week every Friday.