SYRACUSE — Less than a year after he was reinstated to morning drive — following a two-year absence in the market — syndicated talker Don Imus will once again be dropped from the lineup at WHEN.

Word of the change comes via today’s edition of NorthEast Radio Watch, in which Scott Fybush reports Imus will be replaced by Stephen A. Smith. The replacement’s show is part of the Fox Sports Radio’s network lineup; WHEN carries Fox Sports during the balance of the day Imus signs off, and had previously carried Fox programming in the mornings during the two-year period when Imus was not being carried in the Syracuse market. 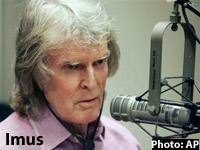 You may recall in April 2007, Imus was fired by CBS Radio after making some racially-charged comments about the Rutgers University womens’ basketball team.  Although Imus was brought back on the air by ABC Radio Networks about a year later, his show wasn’t carried in the Syracuse market until WHEN picked it back up in April 2009.

If that March 5th date sounds familiar — you’re not alone.  That’s the same day the Syracuse market’s affiliation with ESPN Radio moves from Citadel Broadcasting’s WNSS (1260AM) over to two AM stations (WTLA and WSGO) and two FM translators owned by Galaxy Communucations.

Immediately, we started to wonder if Citadel — which also syndicates Imus — would be bringing “The I-Man” over to WNSS.  It’s been awhile since we’ve heard anything about Citadel’s post-ESPN plans for WNSS.  So we asked Ops Manager Tom Mitchell, and he told us, “I can’t share an update yet; but I will be able to very soon.”

Back in December, Mitchell confirmed the locally-produced afternoon show, On the Block with Brent Axe, would remain in place even after ESPN moves across town.  So far, that’s the only “definite” on the WNSS lineup.

Of course, we’ll pass along any new developments as we learn them.

One Comment to WHEN to Replace Imus on March 5