SYRACUSE — Almost a quarter-century after WSCP-FM 101.7 first signed on the air, three former on-air personalities had a small reunion, this past week.  Two of the guys are still working in Syracuse radio; the third recently visited from his retirement home down south. 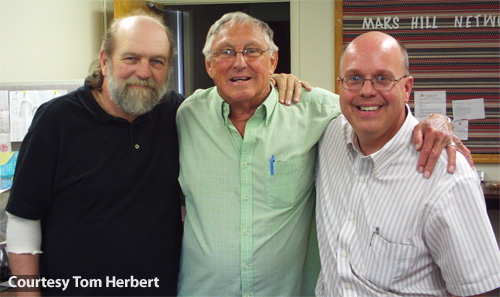 From left to right, that’s Dan Dunn, Fred Lewis and Tom Herbert.  Our thanks to Tom for sending in the picture.  He explains:

Attached is a picture of 3 former on-air personalities of WSCP-FM 101.7 when it went on the air in 1987 to simulcast the traditional country format on WSCP-AM 1070.  … Dunn and Herbert are currently employed at the Mars Hill Christian Radio Network, based in Syracuse at 102.9FM.  Lewis is retired and was visiting this week from the Carolinas.  We had this picture taken at the Mars Hill office and studios on Onondaga Hill.
Lewis and Dunn were also owners of WSCP-FM when it went on the air.  Fred Lewis and Dan Dunn first worked together at WSEN AM and FM in Baldwinsville in the 1970’s when it was a country radio station. Fred Lewis was one of the first full-time country radio personalities in Central New York in the 1960’s and continued to play country music on WOSC in Fulton and then on WSCP through the 1990’s.