OSWEGO — Even though SUNY Oswego’s Communication Studies Alumni Reunion dinner didn’t start until 7pm last Saturday, many arrived on campus earlier in the day for a panel discussion, followed by a tour of the school’s recently-improved broadcasting facilities. 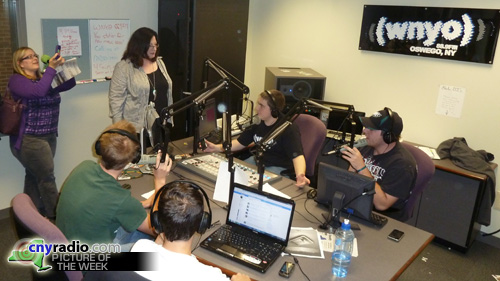 During the tour, a few people (including your editor) stopped by the studios of student-run radio station WNYO 88.9FM.  The hosts of “Four Guys in a Box” invited everyone to come into the studio to chat for a few minutes.  Some of the graduates recounted tales of how they got suspended from their air shifts for mocking the playlist, or for playing off-playlist songs.

Those familiar with the old WNYO studio, in the basement of Hewitt Union, will notice that the “new” WNYO studio (it’s been around for a few years now, but the studio was still under construction when the previous alumni dinner was held) in the Campus Center (also a relatively-new building) is considerably larger in size.  Fitting 4 people into the old studio was a challenge, but as you can see, the new studio has more than enough room for 4 talent and a few guests standing around the sides.

And just like in the “real world,” the WNYO studio can be switched back and forth between live talent or automation at any time… but unlike the real world, automation’s more of a convenience than a cost-saving measure.  A message on the bulletin board on the wall reads, “4pm Show today, please put on automation after show.  We can’t make it.  — 5pm Show.  Thanks!”

Before automation was installed, your editor remembers many times when WNYO would have no option but to sign off and power-down the transmitter anytime there was nobody available for an on-air shift.

We’re always interested in a look at what’s happening today at your station — or a look back into the past.  There’s a new Picture of the Week every Friday… as long as you keep sending in those submissions to cnyradio@cnyradio.com.  Is your on-air staff dressing up for Halloween?  Take some shots and share them!