HERKIMER — Thanks to reader submissions, we’re firing up the Picture of the Week time machine for at least the next three weeks in a row!  This week, we’re headed 50 years back in time — and about 50 miles east from CNYRadio.com HQ for a look inside the studios of WALY in Herkimer.  Any guesses on who these two guys are?

Their names are right below the photo, so if you want to guess, don’t scroll down too far yet. 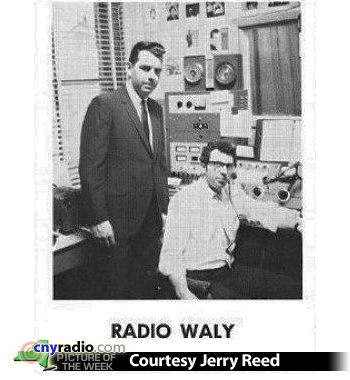 First, our thanks to Jerry Reed for sending in this publicity photo, which he says was taken in the 1960s.  WALY is the old call sign for 1420AM — today, the station is owned by Arjuna Broadcasting and it identifies as WNRS.

Jerry says the man standing is Don Alexander, who later went on to become part-owner of WIBX and WLZW, the GM at WTNY in Watertown, and he’s still up north, working with Jefferson County IDA.

At first, Jerry wasn’t sure who is sitting — but after running the photo by a few likely candidates, it was agreed the gentleman sitting is Ron McNeil.  According to Sandy Parker, who helped Jerry identify McNeil, “he was also a newsman at WRUN when I worked there in 1971 with Gordy Hood and Bill Worden.”

Our thanks again to Jerry Reed for sending in this great vintage photo.  We’re always looking for more!  Whether it’s a shot of something that just recently happened at your station, or a look back at someone/something from the past, send those shots to cnyradio@cnyradio.com or upload your submissions via the Contact Form.  There’s a new Picture of the Week every Friday.