UTICA — When we asked local broadcasters for their reflections on the past decade as part of CNYRadio.com’s 10th anniversary earlier this year, many said the “biggest” story of the decade was consolidation — which usually means job cuts.  But it’s a refreshing sign of a recovery this week, as a television newsroom in Utica comes back to life following an eight-year slumber. (Also inside: WUTR set shots from 2000 airchecks.) 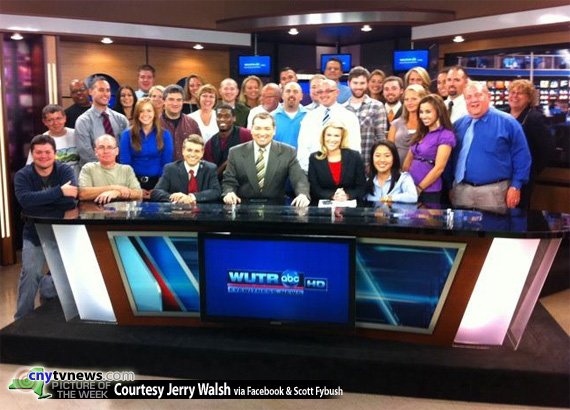 The entire staff of WUTR, WFXV and WPNY posed for this shot on the brand new set of Eyewitness News HD, which premiered this past Monday.

Our thanks to Scott Fybush, who “borrowed” this picture for us from Jerry Walsh, who had posted it on Facebook.  On his own website, Northeast Radio Watch, Fybush reported earlier this week that Walsh was recently promoted from News Director at Nexstar’s WROC to a corporate position with Nexstar.  As part of his new duties, Walsh — a former manager at WKTV before he went to Rochester — spent some time in Utica to help launch the news operation.

And just for fun, your editor pulled out a few old screen captures from the old WUTR news set from 2000 — apologies for the mediocre reception, but these were the only screen captures I have showing wide shots of the set. 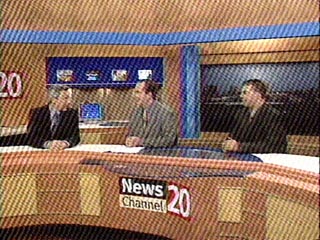 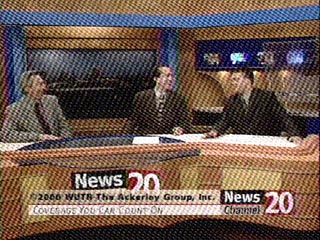 Horine, Osterhaus and Dudek again, from a different show, each one seat over. 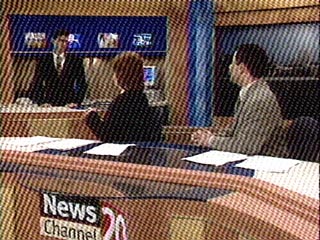 Much more from WUTR’s past on YouTube — not posted by us, but by various other people:

We’re always interested in what’s happening today at your station, or a look back to a “blast from the past.”  TV or radio, we like to include a mix of everything from all the markets we cover.  Send those shots to cnyradio@cnyradio.com.  There’s a new Picture of the Week every Friday.