UTICA/ROME — It’s a joint effort between radio and TV stations in the Mohawk Valley, and organizers say this year’s “Stuff the Bus” toy drive is on pace to surpass last year’s total of 8,000+ toys.  The entire thing wraps up with two events taking place tomorrow — in New Hartford and in Utica. 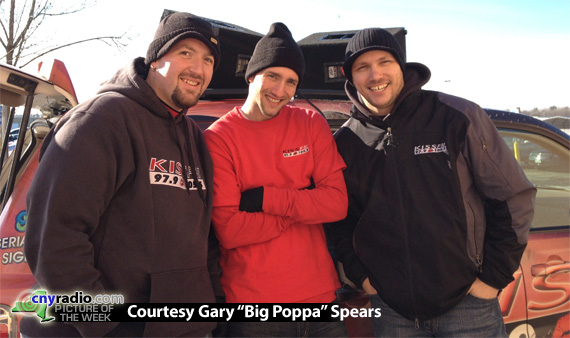 Each Saturday for the past few weeks, KISS-FM, Bug Country (WBUG/WBGK) and 95.5FM WUTQ have been teaming up with NBC affiliate WKTV and a local school bus company to broadcast live from various locations across the market, inviting listeners to “Stuff the Bus” with new, unwrapped toys.  The donations will be given to local charities, who will in turn, give the toys to less-fortunate families.

The final “Stuff the Bus” stop will take place tomorrow from noon to 4pm in front of Toys-R-Us in New Hartford.  According to the Stuff the Bus website, the entire effort wraps up tomorrow night with the 7th Annual “Teddy Bear Toss” during Utica College’s home hockey game at the Utica Memorial Auditorium

We’re always grateful for your photo submissions for future editions of Picture of the Week.  Whether it’s a recent happening from your local radio or TV station, or a nice “blast from the past,” send those shots via email or upload via the Contact Form.  There’s a new Picture of the Week every Friday.