SYRACUSE — Years before the practice of radio stations “going all-Christmas” became a popular trend across the country, there was Big Mike’s Christmas Broadcast.  Every year, Sunny 102’s Big Mike Fiss invites dozens of local musicians to perform holiday favorites live on the air.  This year was particularly notable — it was the 30th year Fiss has staged his popular Christmas special. 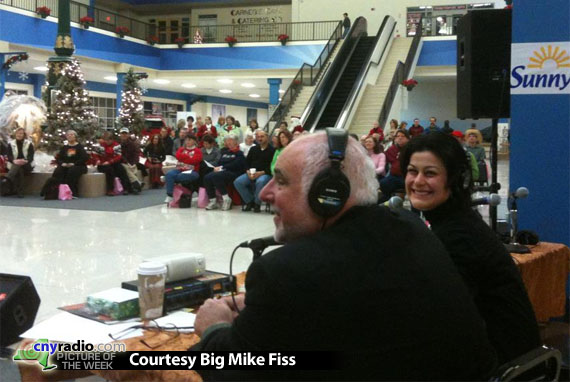 Our thanks to Fiss for sending in this shot of himself and co-host Melissa Midgley at their Sunny 102.1 (WZUN) broadcast table during the live show, this past Wednesday at the center court inside Driver’s Village in Cicero.

As we reported earlier in the month, Fiss promised his 30th Christmas show would feature the biggest guest list ever — and he wasn’t kidding.  He told us the show had a “great turnout, wonderful performances” and it “went almost 5 hours!!!”

If you missed the live show, no worries — Fiss says the original live broadcast was recorded, it’s being trimmed down to four hours, and it’ll be rebroadcast on Sunny 102 tomorrow from 6 to 10am.

We’re always grateful for the chance to see what’s happening today inside your local radio or TV station… or a look back to a “blast from the past.”  Just send those photos to cnyradio@cnyradio.com or upload via the Contact Form.  There’s a new Picture of the Week every Friday.  Thanks again to Big Mike for sending in this shot!