SYRACUSE — It’s pretty routine to see sports announcers like “Voice of the Orange” Matt Park along the sidelines during TV coverage of Syracuse University men’s basketball games.  But if you were paying attention just after SU finished its 75-49 trampling of Seton Hall on Wednesday night at the Carrier Dome, you might have spotted another local radio personality who hammed it up for the TV camera. 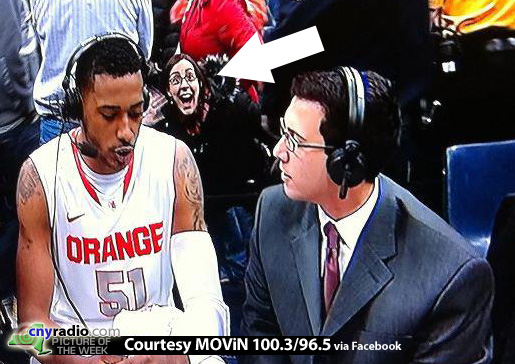 Highlighted by the big arrow, that’s Heather Daley, morning co-host from MOViN 100.3/96.5 (WMVN).  She happened to be walking through the field of view during a post-game interview with Orange Center Fab Melo, and stopped briefly to smile and wave for the camera before moving on.  This snapshot from a TV screen appeared on the radio station’s Facebook page this morning.

At the beginning of 2011, I set an “unadvertised goal” to have a Picture of the Week every single Friday for the entire year.  In past years, I’ve missed a week here or there due to vacations or simply being too busy to get something together before the deadline… but click “Pic of the Week” in the menu at the top of the page, and you’ll find that not a single week was skipped during 2011!  (The last time we missed it was December 31, 2010.)

I can’t guarantee I’ll do as well in 2012 — but the job certainly becomes MUCH easier with your help!  There were a few “close calls” where reader-submitted photos came to the rescue.  Whether you’ve got shots from a recent event at your station, or a notable “blast from the past,” send those photos to cnyradio@cnyradio.com or use the Contact Form.  Thanks!