SYRACUSE — After a few weeks off, The Irish Power Hour has a new radio home in Syracuse… and a chance to pick up some new fans in the Utica market.  Starting this Sunday, co-hosts Sean Johnston and Cabrina Gilbert bring their weekly hour-long show to Galaxy’s TK99/105 (WTKW/WTKV).  It’ll be simulcast on Utica’s 96.9 WOUR.

That’s the word from Mark Bialczak on syracuse.com.  He reports IPH had been absent from the local airwaves since Cumulus Media chose not to renew its contract with Johnston and Gilbert at the end of 2011. 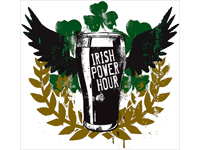 Bialzcak’s story didn’t include specifics behind the split with Cumulus, but he reports the hosts are pleased that their new arrangement with Galaxy will expand the show’s reach into the Utica-Rome market.  Galaxy’s Mimi Griswold says WOUR’s float in the Utica St. Patrick’s Day parade will feature an Irish band and a banner to promote the show.

By keeping the same Sunday 9pm timeslot it had at 95X, the “Irish Power Hour” will take the TK99 timeslot formerly occupied by Dave Frisina’s long-running Soundcheck, a weekly show devoted entirely to music by local artists.

Frisina was dismissed by Galaxy near the end of December.  He has since resurfaced on afternoons at Cumulus’ 105.9 The Rebel, and Soundcheck continues in the same timeslot there — meaning the two specialty shows will once again be airing opposite each other every weekend.

Your editor is always looking for the latest news from radio and TV stations in Central New York… but it’s a tough task to keep an eye on 100+ stations in three markets.  Your news releases and tips are always appreciated at cnyradio@cnyradio.com or via the Contact Form.  You can even send a Twitter DM to @CNYRadio or post a note on our Facebook or Google+ pages.