SYRACUSE and UTICA — As you’ve no doubt heard by now, broadcast icon Dick Clark died today at the age of 82.  And you read here this afternoon that Clark’s legendary career started right here in Central New York, first at WRUN radio in Utica, then WOLF in Syracuse, then back to WRUN and onto his first TV experience at Utica’s WKTV.  Tonight, some local broadcasters share their reflections — and photos — from crossing paths with “America’s oldest teenager” over the years. 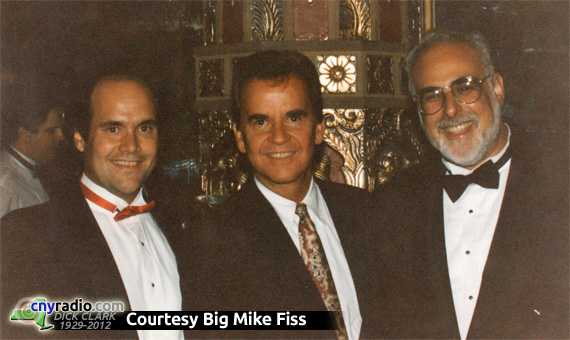 “Big Mike” Fiss from Sunny 102 (WZUN) got the ball rolling by emailing this photo of himself, far right, Clark in the middle, and co-worker Glenn “Gomez” Adams from TK99/105 (WTKW/WTKV) at left.  Fiss says he and Adams met Clark at an event at Syracuse’s Landmark Theater in 1993.  “I remember he was extremely nice and very easy to talk to,” Fiss wrote.  (Keep reading for a link to a promo Clark had recorded in advance of this “Walk of Stars” event.) 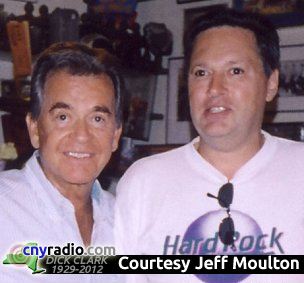 Longtime readers of CNYRadio.com might recognize this photo — it was our Picture of the Week on November 14, 2003.  The orignal caption: “Oldies 92.1 (WSEN) weekender Jeff Moulton made a trip to the west coast recently where he stopped by Dick Clark’s offices for a visit.”  Like Clark, Moulton worked at WRUN earlier in his broadcasting career.  (This and all other “Picture of the Week” installments from the original CNYRadio.com, 2001-2005, available in the photo albums on our Facebook page.) 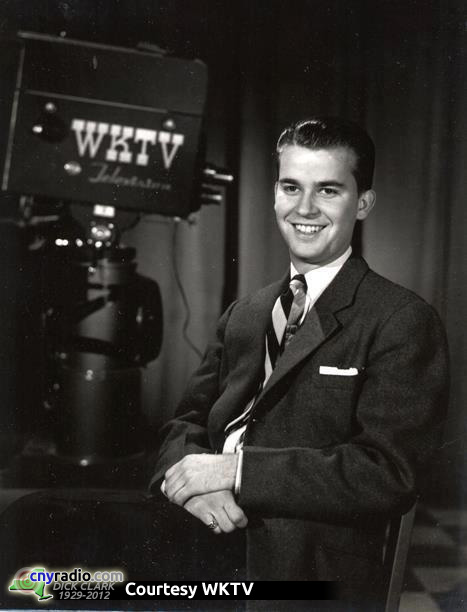 Lastly, a shot of Clark — when he was using the name “Dick Clay” on the air — at NBC affiliate WKTV.  The station has posted this photo, and a few others, on its website and its Facebook page.  They’ve even created a special custom “cover photo” for the station’s Facebook account.  “We’re proud to say he started in the hallways we all work in today,” read the status update which accompanied this photo.

Earlier Coverage from CNYRadio.com and CNYTVNews.com