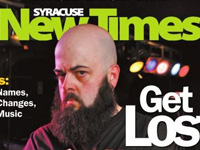 SYRACUSE — A familar voice has returned to local rock radio, after nearly six years off the air.  Scott Dixon recently took the night shift at Cumulus rocker 95X (WAQX), a position that has him hosting shifts seven days a week.  You might remember him from Clear Channel’s relatively-short entry to the local rock station competition via New Rock 105 The Dog (WWDG) from 2003 to 2006.  Dixon’s career — and details of a recent health scare — are covered in the latest edition of the Syracuse NewTimes.

Dixon is the cover story of this week’s edition of the NewTimes, available for free in plenty of locations in the area today through next week… the article’s also available online.  Written by Jess Novak, who also covers middays on sister station 105.9 The Rebel (WXTL), the article focuses greatly on Dixon’s involvement with the local music scene.  He’s worked at a number of local venues, mostly the Lost Horizon.

In the article, Dixon describes his time at Clear Channel as “not the most pleasant experience.”  Later in the article, he explained further, “it showed me the absolute worst of how people can be in this industry and it did really make me want to never do it again.”  After nearly six years outside of radio, he says of his new gig at Cumulus, “seeing that there are people who have a passion for it and truly care about the history and legacy of terrestrial radio just re-inspired me” to get back into radio.

The article also recounts recurring episodes last year which had Dixon waking up and vomiting in the middle of the night.  Eventually going to the doctor, Dixon learned that his gallbladder had failed.  A surgery and resulting complications kept him in the hospital for three months, and in bedrest for an additional two.  Thankfully, all is well today — you can read the rest on the NewTimes website.