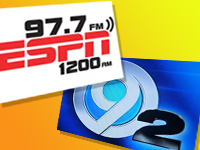 Updated 5/23 with guest appearance schedule — SYRACUSE — Next Wednesday will be a special day for ESPN Radio CNY’s locally-produced show, Upon Further Review. Rather than hosting the afternoon drive gabfest from the East Syracuse studios of NewsChannel 9, hosts Chris McManus and Steve Infanti are hitting the road to host the show from the ESPN mothership in Bristol, Connecticut.

It’s part of ESPN’s annual “Audio Avenue” event. McManus, program director for the local ESPN Radio stations, tells CNYRadio.com that the sports network “invited the major market affiliates and a few other affiliates that have performed well over the past year. We were lucky enough to be chosen in that second group.” He added, “for me personally, its really a cool thing to go out and do our show where the best sports broadcasters in the country work every day.”

On May 23, Upon Further Review will air in its normal timeslot, 3-6pm. Because of the remote location, you won’t be able to “watch” the usual simulcast on WSYR-TV 9.2, but the ABC affiliate’s digital subchannel will still simulcast the audio feed. Fans will still get a look inside ESPN though — McManus says Infanti, sports director for WSYR-TV, will produce a feature story about the trip, which will air on that night’s sportscast.

“We’re thrilled to be invited,” McManus said, noting that a variety of ESPN Radio network talent will be making themselves available to the affiliates, as will various SportsCenter anchors and other ESPN analysts. It’s too early say exactly who will pop into the studio, but McManus says, “we’re going to try to fit as many as we can into our show on Wednesday.”

The station has posted its tentative schedule for “guest appearances” from ESPN network personalities on its website:

Kudos to syracuse.com on catching the lineup, which was not available when we first published this story last week.

The trip won’t just be about doing the show live in Bristol. “They have all kinds of workshops and different things that I hope we can learn from and incorporate into our product,” McManus said. “We started the station only about two years ago, and ESPN has been very accommodating in helping us build a brand.”