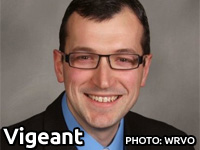 Updated 6/14 with additional information — OSWEGO — It’s a classic example of climbing the professional ladder: Fred Vigeant started with WRVO in 2000 as an undergrad at SUNY Oswego.  Over the next 12 years, he’d progress from being a producer to Operations Director, and eventually to Program Director in 2006.  Next week, Vigeant will bid WRVO farewell as he moves south along I-81 to work for another NPR affiliate.

Specifically, Vigeant will be headed to Harrisburg, Pennsylvania to WITF public radio and television.  He tells CNYRadio.com his last day with WRVO will be next Friday, June 22.  It’ll be a quick move, as he begins in his new role as program director for WITF the following Monday.  And it won’t be just any ordinary Monday there — June 25 is WITF radio’s first day running an “all news and information” format, after having run a blend of talk and classical music programming since the station launched in 1971.

After CNYRadio.com received a tip on Vigeant’s departure, he confirmed the move.  Before we had the chance to finalize this story, a few more tips rolled in.  Although the departure may be “old news” to those close to Fred and/or WRVO by now, Vigeant explained he “had initially been quiet” about the move because he says WITF was still in the process of contacting others who had applied for the position.

In addition to his work at WRVO, Vigeant served for several years as a supervisor for the school’s academic radio lab, maintaining and helping students learn how to use audio production equipment.  For a short time, Vigeant also taught some Broadcast Copy Writing classes.

One former colleague who provided a tip on Vigeant’s departure noted, “under his leadership and programming sense, WRVO rose to become one of the top 25 rated NPR news and talk affiliated stations in the country.”

Vigeant tells CNYRadio.com he “didn’t originally plan to go into radio.”  When he started at SUNY Oswego, he enrolled as an education major with sights set on becoming a high school science teacher.  “Over time, I became very involved with [student-run 88.9] WNYO and WRVO and fell in love with it.”  In his junior year, Vigeant changed his major to broadcasting.

After joining WRVO first as an audio engineer and producer, he was elevated to full-time status in 2002, to install the station’s then-new Simian automation system.  “WRVO had purchased Simian a few months earlier,” he explained, “but didn’t have anyone available” to devote the time to get the system up and running.  Before long, Vigeant had middays, evenings and overnights automated.

Looking ahead, Vigeant tells CNYRadio.com the move to Harrisburg ‘”will be a big step.”  The responsibilities will be considerably larger:

I will be working with their content staff on both the radio and TV side of the organization as well as contributing to their magazine and new media efforts.  Many aspects of my current job are similar to the new job at WITF. Most of my focus will be on researching audience data for TV and Radio, ensuring we’re providing the best programs on both services and developing promotion to cross-promote TV to Radio and Radio back to TV.

Vigeant describes himself as a “life long fan of radio,” having grown up in a home where “radio and newspapers were more important” than TV.  Prior to discovering WRVO upon his arrival at SUNY Oswego, Vigeant says “public radio was a staple in our house growing up,” listening to Fairfield, Connecticut’s WSHU and New York City’s WNYC.  On the commercial side of the dial, Vigeant remembers listening to “The Glenn and Pat Show” in morning drive on WKCI in New Haven.  The “Glenn” from that duo has a much larger audience today — his last name is Beck. 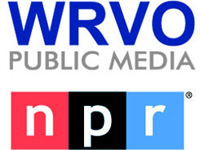 Looking back, Vigeant says he leaves WRVO “with mixed emotions.”  As his first broadcasting job — both during and after college — Vigeant says “WRVO has been my family for the past 10 years.”  Aside from learning a lot from his colleagues, he’ll miss “the energy station and staff get from the talented students who work with us.”  He notes that WRVO takes on about 8-10 student interns each semester, and “it’s great to see their enthusiasm, interest, and new ideas they bring to the table.”  Vigeant also noted he’ll be leaving a “hard working and talented program staff” who will be tasked to finish out the execution of a number of projects “which will escalate WRVO to new heights.”

Looking forward, “one of the things I like about moving on to WITF is that it is a multimedia organization,” Vigeant says.  The station produces content for television, radio, print and the internet.  “They are doing it all,” he says.  “You have the option to watch some content, or listen to it, read about it, or see it in some fashion online.” 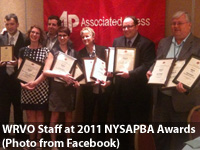 Although the multi-prong approach “represents a direction [all] media outlets are going to,” Vigeant says “there is still something very special about radio.”  He emphasizes the word “still,” explaining:

Despite a significant array of options available to our ears, a number of people still listen to and rely on radio.  That isn’t to say that anyone involved in radio shouldn’t be concerned about their future. It means we need to be sure we’re doing a good job with the art of sound on radio and delivering content worth hearing to keep listeners interested, involved, and engaged.

No word yet on a replacement for Vigeant.  As of Wednesday night, WRVO’s employment page only lists an opening for an Underwriting Support Representative, but we surmise it won’t be long before the PD position is posted.

Got News? Let us Know!

Since some of the tips we received came in anonymously through our Contact Form (and as a result, we couldn’t write back), we want to thank all the CNYRadio.com readers who sent tips.  We also want to thank Fred for always taking the time to respond anytime we had WRVO-related questions for stories here.  Anytime you’ve got news to share about your station — or even if you don’t have a station but you’ve noticed something we haven’t reported yet, we’d love to hear from you at cnyradio@cnyradio.com or via the Contact Form.