SYRACUSE — When you think of “Ted and Amy” from 93Q (WNTQ), you usually think of the morning co-hosts as a pair, since they usually appear on-air and at various community events together.  Earlier this month, Amy Robbins had the limelight to herself for a little bit, appearing as the Grand Marshal in a local parade. 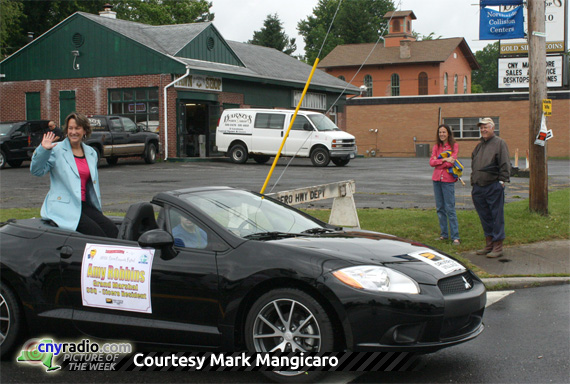 Mark Mangicaro submitted this shot of Amy, waving to spectators as she entered the parade route along Route 11 in Cicero, as part of the town’s Community Festival Parade on June 9.  Robbins is a 15-year resident of Cicero, and those two fellow Cicero residents on the right happen to be Robbins’ sister, Jennifer Herman and her father, Bill Robbins.

Our thanks to Mark for sending along this photo!  Readers, if you work in local radio or TV, we’re always interested in taking a look at what’s happening at your station today… or a nice “blast from the past.”  Send those shots to cnyradio@cnyradio.com, or upload through our Contact Form.  There’s a new Picture of the Week every Friday… the picture you send in could be the picture our readers see here next week!