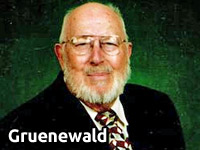 UTICA — Our condolences to the family and friends of Frank Gruenewald, who passed away this week at the age of 86.  Gruenewald started his broadcast career as continuity director at WKTV in 1953, and eventually became general manager of Harron Cable, staying with the company –which became Adelphia Communications along the way — through 2002.

According to his obituary, Gruenewald actively volunteered for many local causes.  Among those which seemed to receive plenty of media attention each year, he’s credited with launching and serving as Executive Director of the “Betsy the Barge” Concert Series at the Lock 20 Canal Park in Marcy.  And for more than a dozen years, he was president of “Christmas on Main Street,” the annual Saturday-after-Thanksgiving celebration held at Utica’s Union Station and Children’s Museum.

Gruenewald served in the US Navy from 1944-1946.  In 1949, he enrolled at Utica College, but his studies were interrupted when he was called back into military service from 1951 until 1952.  Upon returning home, Gruenewald earned his degree in public relations in 1954.

Gruenewald is survived by Dolores, his wife of 60 years, along with three children six grandchildren, a sister and two nephews.

Funeral services are set for this Saturday at 8:00pm at the Heintz Funeral Home on Herkimer Road in North Utica.  Calling hours will be held beforehand, from 2-4pm and again from 6-8pm.  A private burial with Military Honors will be held at the convenience of the family.