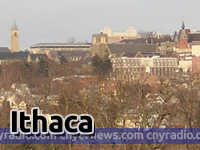 ITHACA — Ten years of hard work are finally paying off for the leaders of Ithaca Community Radio.  The non-profit, community-owned station has launched its own programming lineup, after years of simulcasting public stations from places like Geneva and Binghamton.

Ithaca Community Radio’s primary signal, 88.1FM, is actually translator W201CD, licensed to Lansing.  As per FCC regulations, a translator cannot generate its own programming — it must repeat programming from a full-power station.  When Ithaca Community Radio (ICR) was established in 2002, founder Lyn Gerry “rescued” the license from Syracuse Public Radio, where it was about to lapse.  That’s how ICR started out with “just” a translator.

Over the years, ICR has obtained licenses for and subsquently signed-on full-power class A stations 89.9 WINO / Odessa and for 91.1 WRFI / Watkins Glen.  While all of this was going on, ICR’s Ithaca signal had orignally been simulasting programming from Geneva NPR affiliate WEOS.  As reported here in March 2010, that changed when WEOS joined with Rochester’s WXXI to sign-on 90.1 WITH in Ithaca; the closeness of WEOS at 89.7 and WITH at 90.1 made it impossible for ICR to receive the WEOS signal any longer.  As a result, ICR struck a new deal to simulcast Binghamton’s WSQX.

Now, ICR is originating its own programming on WINO, which in turn, feeds W201CD and WRFI.  According to the Ithaca Journal, the schedule includes a number of talk programs which are freely available, including Al Jazeera news for an hour in the morning and 30 minutes in the evening, “The Capitol Pressroom” from Syracuse’s WCNY-FM at 1pm and nationally-syndicated Amy Goodman’s “Democracy Now!” at 5pm.  Outside of talk programming, ICR is offering a variety of jazz, rock and blues.

Over at NorthEast Radio Watch, our colleague Scott Fybush was first to report on the developments at ICR in this week’s edition, which came out yesterday.  He reports ICR started its independence with automated programming loops to fill the airwaves while connections were built out from the Ithaca studios to the WINO and WRFI transmitter locations.

The Ithaca Journal’s article, based on an interview with the ICR board president Rene Borgella and board member Jim Murphy, says that ICR plans to add more locally-produced programming in the future.  They envision talk-based programs about public affairs, and music-based programs as well, noting that ICR’s recording studio has enough room for “a few musicians.”

All of ICR’s equipment has been donated or salvaged, according to the newspaper.  ICR’s own website includes a “wish list” of items including flash recorders, microphones and rechargeable batteries.  ICR also welcomes monetary and in-kind donations through its website.

We know we have readers in Ithaca, but we don’t hear much from Ithaca… if you’ve got radio news to share from the area formerly known by Arbitron as the “Ithaca/Cortland” market, please let us know: cnyradio@cnyradio.com.  Because of the distance between Ithaca and CNYRadio.com HQ in Syracuse, we rely heavily on reports from listeners and radio insiders within the market.  If you’d like to contact us without revealing your name, you can do so through our Contact Form — there are spaces for your name and email, but you can leave them blank.