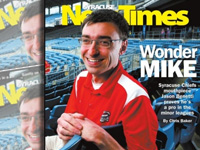 SYRACUSE — Jason Benetti logs most of his on-air hours as play-by-play announcer for the Syracuse Chiefs. If you’re not a baseball fan, you might know his name from televised local high-school and college sports. You might not have known much else about Benetti until now — he’s this week’s Syracuse NewTimes cover story.

The article includes a glimpse at a typical workday for Benetti, whose play-by-play duties are just one of many under his title as director of communications for the Triple A affiliate of the Washington Nationals. You’ll also learn how Benetti got into sports broadcasting and how a serious illness almost took his life at a very young age.

There’s much more in the story — you can grab a free copy of the weekly newspaper at hundreds of locations in and around Syracuse through next Wednesday, or check out the story online. Chris Baker’s writing is accompanied by plenty of photographs by Michael Davis.