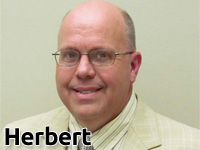 OSWEGO — Just shy of three years since leaving WRVO, Tom Herbert has rejoined the NPR affiliate’s underwriting sales team. Since leaving WRVO in 2009, Herbert had been working in a similar role for the Mars Hill Christian Radio Network, which is headquartered in Syracuse.

Herbert’s new title of “Underwriting Sales Representative” differs slightly from the “Corporate Support Representative” title he held when he left WRVO in 2009, but the duties appear to be nearly identical. In an announcement issued today, WRVO says Herbert will be tasked to “generate underwriting support from corporate and institutional clients.”

Herbert was WRVO’s first full-time underwriting rep during his previous run with the station. Since then, WRVO says its underwriting staff has grown to three representatives. “Tom brings a wealth of professional experience at a time when service is expanding and listenership has never been higher,” said WRVO General Manager Michael Ameigh.  He pointed to the recent addition of WRVH in Clayton and plans to expand into Ithaca as example of WRVO’s growth.

Herbert says he plans “to expand upon WRVO’s successful on-air marketing services to include event and web-based promotion that altogether provides a complete promotional opportunity for clients.”

Our thanks to WRVO’s Leah Landry for including cnyradio@cnyradio.com among the media outlets on her email distribution list! We invite and encourage all local radio and TV stations to do the same, if you haven’t already… we’re always interested in the latest news from stations within our CNYRadio.com and CNYTVNews.com coverage area.