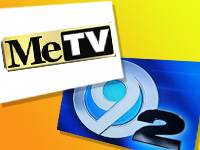 SYRACUSE — It’s something old, yet something new… and coming this fall, it’ll be on channel nine-point-two.  The digital subchannel of NewsChannel 9 (WSYR-TV) is going to become an affiliate of the Me-TV network starting in September.  Looking at the network’s lineup, it might be best described as something similar to what “Nick at Nite” used to be, way back when it first started.

According to a press release from Me-TV, the affiliation begins on September 10, exactly one week after Labor Day.  Two other stations owned by Newport — in Tulsa, OK and Salt Lake City, UT — added the network to their own digital subchannels as of yesterday.  The network says it “features a wide range of programming which audiences and advertisers find comfortable and engaging.”

The lineup on Me-TV — an abbreviation for “Memorable Entertainment Television” — is entirely made of reruns from the 50s through the 70s, ranging from The Honeymooners and I Love Lucy, to The Beverly Hillbillies, Perry Mason and The Brady Bunch.

Since the 9.2 subchannel launched, a significant portion of the day was devoted to providing a clean feed of the station’s LiveDoppler 9 weather radar.  The lineup also includes tape-delayed replays of newscasts for viewers who might have missed the original live broadcasts.  The station’s mid-morning local talk show Bridge Street and other selected programming are also re-broadcast at later times.  During severe weather, the radar usually superseded anything else, so viewers could track a passing storm.

Last fall, WSYR-TV invested considerable resources in building a dedicated studio and control room for Upon Further Review, a weekday afternoon sports talk show which originally aired only on ESPN Radio 97.7 and 100.1 (WTLA/WSGO).  The move from Galaxy Communications’ studios in Armory Square to NewsChannel 9’s plant in East Syracuse not only allowed for the simulcast on 9.2, but also makes it easier for WSYR-TV sports director Steve Infanti — who joined the program as a co-host a couple months earlier — to jump right back into his TV duties immediately after the talk show concludes.

There’s been no indication from anyone involved as to whether 9.2 will continue to simulcast Upon Further Review or if the timeslot will be superseded by Me-TV.  Time Warner Cable subscribers can find WSYR-9.2 on digital cable channel 890.  Verizon FiOS customers can find it on channel 470.  The addition of WSYR 9.2 will bring Me-TV to 129 affiliates, reaching 82% of the country.  Me-TV started in 2010.

We’re always looking for the latest on what’s happening inside local broadcasting.  Station managers are encouraged to send press releases and other updates directly to cnyradio@cnyradio.com (if you have a press distribution list, just add us).  Even if you’re not a manager, we love insider tips too — the same email address will do the trick, or use the Contact Form.  If you’d prefer to remain anonymous, just let us know — we highly value our sources and we would never share your identity with anyone.  You don’t even need to provide your name or email if you use the contact form.