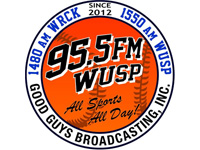 UTICA-ROME — Although it’s been about a week since 95.5FM WUSP signed-on, it’s taken about that long for us to find out what the Mohawk Valley’s newest sports talk station is bringing to the table.  On top of a network affiliation and deals with the New York Mets and the New England Patriots, owners are promising plenty of locally-produced programming.

According to WUSP’s new Facebook Page,which launched late last week, longtime local broadcaster and Good Guys Broadcasting co-owner Tom Coyne is hosting weekday mornings from 6am to 9am.  He’s followed until noon by Hank Brown, another longtime local broadcaster who has been eager to get back on the air since leaving the same three frequencies (under its previous format) in April 2011.  CNYRadio.com readers may recall Brown had announced plans to host mornings on WKAJ out of Saint Johnsville late last year, but the plans fell apart when WKAJ missed the sign-on deadline for its construction permit.

There are plans for local programming during afternoon drive as well.  Thanks to an anonymous reader, CNYRadio.com has obtained a copy of a seven-page publicity packet produced by Good Guys Broadcasting.  It mentions plans for an afternoon talk show which would feature interview and call-in segments sponsored by local sports-related businesses.  The station also says it’s planning to offer “a healthy schedule of local sports play by play,” focusing on high school and college football, basketball, hockey and soccer.

On the professional level, WUSP is already carrying New York Mets baseball, and will also be carrying New England Patriots football.  The publicity packet mentions WUSP is “working to secure an affiliation with an NHL franchise of interest to local fans.”  (To the best of our knowledge, the New York Rangers are currently signed to Galaxy’s ESPN Radio [WTLA/WIXT/WRNY], so we’ll be waiting to see if WUSP goes with the Buffalo Sabres, the New York Islanders, or perhaps a team from a neighboring state.)

Hours not occupied by play-by-play or otherwise regularly-scheduled local talk programming will be filled by the Sports Byline network.  And as previously reported, Good Guys Broadcasting will continue to air weekend ethnic and religious programming which was already on these three stations before it took over control from Roser Communications Network.  Those include programs like Voice of Italy, Radio 202 and The Polka Review… which were formerly heard on Roser’s four-station WUTQ simulcast, but stayed on the WUSP stations after Roser condensed its news/music/talk format exclusively onto 100.7 WUTQ-FM.

Our thanks again to all the readers in the Utica area who’ve helped us keep up with the developments at WUSP.  (We’re looking forward to the website’s promise of live streaming coming soon, so we can finally listen in from CNYRadio.com HQ.)  Anytime you’ve got news to share about local radio or TV in Central New York, drop us a line at cnyradio@cnyradio.com or use the Contact Form.  If you’d prefer we not use your name, just let us know… in fact, if you use the form, you don’t even need to provide your name or email address.

12 Comments to Mets and Patriots Compliment Local Sports on 95.5 WUSP