SYRACUSE — They haven’t crossed paths in roughly 25 years, when one was replacing the other on the morning show at Y94FM (WYYY).  But thanks to social media, these former Syracuse radio personalities were finally able to catch up with each other at last month’s Iron Girl triathlon. 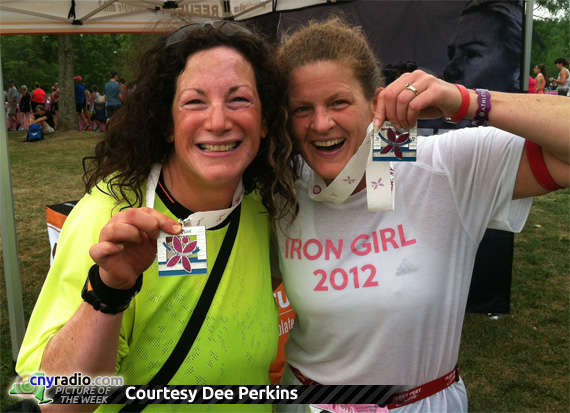 Dee tells CNYRadio.com, “Marti and I met in 1987 when I took her place on Big Mike’s show.  I had not seen her since, but thanks to the magic of Facebook, we both knew we would be at the Iron Girl.  25 years later, here we are, rocking our medals!”

Thanks again to Dee Perkins for sending in this photo — making this the 10th consecutive “Picture of the Week” where we’ve featured reader-submitted photos!  We’re excited to see how much longer this streak can continue… so keep those photos coming in.  As long as it has something to do with local radio or TV, past or present, cnyradio@cnyradio.com is the address, or you can upload a photo through our Contact Form.  There’s a new Picture of the Week every Friday at 7:00am.