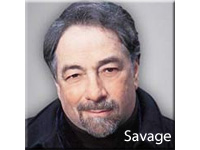 SYRACUSE — Nationally-syndicated talk show host Michael Savage will be absent from News Talk 106.9 and 570 WSYR and hundreds of other affiliates across the country until further notice, after the California-based host won a long-running lawsuit with his former syndicator, Talk Radio Network.

National radio industry trade sites broke the news yesterday: Savage had been battling with TRN since 2010, about whether or not he was free to move his show to another syndicator, after his contract with TRN had ended.  With Savage getting the victory in court, his relationship with TRN ended immediately.

Local ABC affiliate NewsChannel 9 (WSYR-TV, which was once, but is no longer affiliated with WSYR radio) spoke with WSYR operations manager Rich Lauber today.  He says he hopes to bring Savage back to WSYR, if and when Savage strikes a new syndication deal.  In the meantime, it appears WSYR will stick with a yet-to-be-named replacement provided by Talk Radio Network.  The identity of the new host will be revealed Monday.

According to NewsChannel 9’s story, Savage had been averaging about 8 million viewers a week, making him the third most-popular syndicated talk radio host in the nation, behind Rush Limbaugh and Sean Hannity.  Other reports say Savage’s show had about 300 affiliates nationwide.

Savage’s show aired on WSYR from 10pm to 1am weeknights, often joined “in progress” after Yankees games, and sometimes pre-empted entirely on nights where the Yanks are on the west coast.