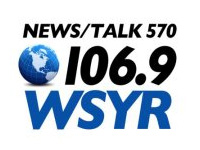 SYRACUSE — While many of Michael Savage’s former affiliates across the country simply stayed with the replacement offered by Savage’s former syndicator, that’s not the case in Syracuse.  News Talk 106.9 and 570 WSYR has instead chosen to give listeners more of Sean Hannity.

Hannity’s show, syndicated by Clear Channel’s own Premiere Radio Networks, had already been airing on WSYR weeknights from 7pm to 10pm.  Now, Hannity is listed on WSYR’s schedule from 7pm to 1am.  Considering that means Hannity’s three hour show is being followed by four hours of previously-aired content, we’ll presume this is a temporary arrangement.

Last week, Lauber told NewsChannel 9 (WSYR-TV) that he’d like to bring Savage back to the WSYR lineup, if and when Savage becomes available again.  But at that point, he hadn’t revealed WSYR’s plans for the timeslot in the meantime.  CNYRadio.com contacted Clear Channel Syracuse operations manager Rich Lauber for more details, but we have not received a response.

As we reported Friday, Savage abruptly parted ways with his former syndicator, Talk Radio Network, after the host emerged victoriously from a two-year legal battle over the terms of his contract.  This week, TRN announced that one of its existing hosts, Jerry Doyle, is moving into Savage’s former timeslot.

Because affiliates would not need to change their local automation equipment to carry Doyle, it was expected that many of Savage’s former affiliates would simply carry Doyle by default.  Although Doyle’s own website says it already has a Syracuse affiliate in Cumulus station WXTL, that station dropped “The Big Talker” format in lieu of rock as “105.9 The Rebel” in January, so the show appears to be free for affiliation.