SYRACUSE — Aside from an intense, soaking rain storm that moved along very quickly, it looks like it was a great time for everyone who took part in the 7th annual Bill Leaf Kickball Tournament, on September 22 in Liverpool.

The tournament is held in memory of Bill Leaf, a former news reporter for 570 WSYR radio and sports anchor for CBS 5 (WTVH).  Back in 2006, a Leaf was hit head-on by a drunk driver who had been driving the wrong way on Interstate 81 in Syracuse.  Leaf was killed instantly.  His killer remains behind bars.  The idea for the tournament came from an award-winning story Leaf produced for WSYR, about the adult kickball leagues which take place at Onondaga Lake Park. 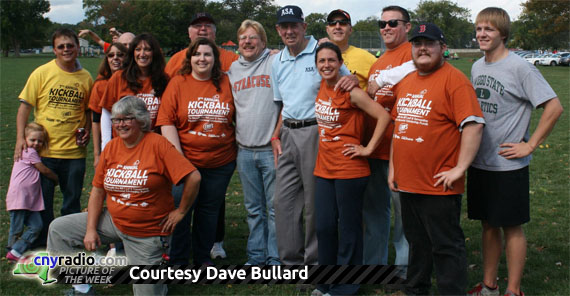 Dave Bullard was news director at 570 WSYR back then.  Once again, he fielded a team of Bill’s former colleagues and co-workers and provided this photo.  Kneeling in front is Ellen Abbott.  Standing at left in yellow is Jeff Wise.  The head peeking out from the back is Mike Foltz, and heading right from Mike, we have Tiffany Latino, Bill’s sister Maria Leaf, Dave Bullard (behind Maria), Chris Weidman, umpire and former longtime NewsChannel 9 personality Mike Price, Caroline Tucker, Jim Lerch, Ty Doyle, and Dave’s sons, Daniel and Scott.

We’re told that big rain storm did delay the start of the tournament, but not for long.  This year’s tournament also featured a double-elimination round, saving teams from the dreaded prospect of going “one and done.”  Every team had the chance to play at least two games.  Proceeds from the tournament benefit two local scholarships: one in memory of Bill Leaf, and the other in memory of a local teenager who was also killed by a wrong-way drunk driver.

We’re always interested in a look at what’s happening today, or a blast from the past, at your local TV or radio station! Just send those shots to cnyradio@cnyradio.com. There’s a new Picture of the Week, right here, every Friday at 7:00am.

← Where Are They Now: Promotions for Kevin Keefe and Jeanne Ashley
Utica-area Man on “Jeopardy!” Tonight →