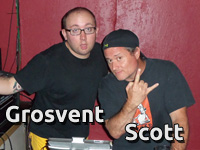 SYRACUSE — Fans who followed Hunter Scott and Josh Grosvent from 95X (WAQX) to KROCK (WKRL/WKRH/WKLL) expected to hear the pair sign-on at 6am yesterday.  But they said their debut was delayed by approximately 90 minutes, thanks to a threat of legal action from their former employer.

It was approximately 7:30am by the time Scott and Grosvent took to the air, explaining they received a cease and desist order from Cumulus Media, the owner of WAQX.  The pair had been hosting “The Show” there for two years, until they resigned after their shift on Tuesday morning.  For those first 90 minutes, they were discussing the matter with Ed Levine, President and CEO of Syracuse-based Galaxy Communications, KROCK’s parent company.

According to the co-hosts, the C&D from Cumulus alleges Scott and Grosvent violated a clause in their contract, which says they must negotiate in good faith with Cumulus before they speak to any competing broadcasters.  But, the pair said their contract expired at the end of August.  Since then, the co-hosts said multiple requests to discuss a new contract with Cumulus went unanswered. 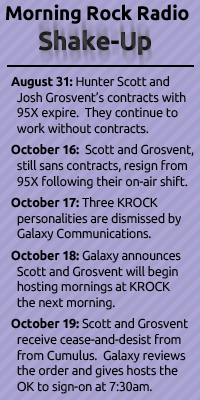 On the air Friday morning, Scott said, “we sent emails, we’ve asked verbally, and every time, they just said ‘it’s in front of corporate, it’s on their desks.'”  Grosvent added, “the cease and desist letter was the first time I’ve actually received any kind of correspondence from the company” regarding his contract.  The co-hosts said that, after several weeks of working without a contract, and given their perception that a new contract wasn’t a priority to Cumulus, they decided to walk.

By the end of business Wednesday, Galaxy had terminated three KROCK personalities, a move which led to the discovery that Galaxy had hired Scott and Grosvent take over its morning show.

In an interview with Mark Bialczak of the Syracuse Post-Standard, Galaxy CEO/President Ed Levine said,”slavery was outlawed 150 years ago in this country.”  Explaining why he authorized his new co-hosts to go on KROCK regardless of the Cumulus C&D, Levine told the newspaper, “last time I checked, in America, if you don’t have a contract and you don’t want to work for your company anymore, you quit.”

Bialczak said Cumulus management in Syracuse did not return his messages.  CNYRadio.com did not attempt to contact Cumulus regarding these latest developments, under the presumption that local management would not be authorized to comment on a legal matter.

Regardless of what may or may not unfold in the coming weeks, both hosts said on Twitter that they’re looking forward to relaxing with their families this weekend.

With the week I’ve had, I just wanna lay around the house today & play with my kids. They don’t care which radio station I’m on. #parenting

Going to watch my son’s x-country race; then chilling with the family. They don’t care what radio station I work for either #parenting