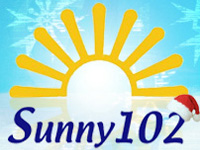 SYRACUSE — With the last part of October (before the hurricane, of course) bringing us a few mild days with temperatures in the mid 70s, it’s easy to forget winter is just around the corner.  But, like clockwork, the arrival of November once again means the arrival of wall-to-wall Christmas music on at least one local radio station.

Listeners who already have visions of sugarplums dancing in their heads can tune to Sunny 102.1 (WZUN).  As they’ve done every November 1st for the past several years, the folks at WZUN, owned by Galaxy Communications, have set aside their regular classic hits playlist to run holiday music around the clock for the next 55 days.

The Sunny 102.1 website reflects the change, with snowflakes in the background and Santa’s hat perched atop the station logo.

For the past few years (at least as long as the current incarnation of CNYRadio.com has been around, anyway), Galaxy had been known to go all-Christmas on Mix 102.5 in the Utica-Rome market at the same time as Sunny 102.  But this November 1st, Mix 102.5 is sticking to its hot AC format.

Our thanks to Mimi Griswold, Galaxy Vice President of Programming, who quickly responded to our inquiry about WUMX this morning.  She confirmed for CNYRadio.com that Mix 102.5 has not switched to Christmas — “yet.”  We’ll keep an ear open for any changes on that front.

We’ll also be keeping an ear on a few other stations that have built a reputation for going all-Christmas at some point during November.

For several years, Syracuse’s Y94FM (WYYY) and Utica-Rome’s Lite 98.7 (WLZW) have been known to flip the all-Christmas switch, usually somewhere closer to the middle part of the month.  And for HD Radio users, WCNY-FM’s HD3 channel offered holiday jazz around the clock last year, starting just a few days before Thanksgiving.

We haven’t yet heard of any exact dates for these three stations, but we’ll keep you posted if and when we learn more.  (Stations: We’d love to hear about your holiday plans, even if you want to issue the details under an “embargo” to be held until a certain later date.  The address is cnyradio@cnyradio.com.)