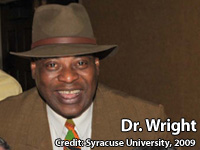 SYRACUSE — Enter the studios of Clear Channel’s Syracuse cluster on a Sunday afternoon and you’ll find most of the studios are unmanned.  “That’s not radio,” said Dr. Rick Wright, in a recent interview with The Stand newspaper.  As the only live DJ in the building on Sundays, the longtime host of Old Skool Sundays on Power 620 (WHEN) recently reflected on radio’s battle to balance technology with personality.

The article by Natalie Caceres appeared on The Stand‘s website last week.  When it comes to replacing live, local disc jockeys with voicetracked or satellite-fed content, Dr. Wright acknowledges “the bottom line is that radio is a business,” but he argues that cutting personalities may have been the wrong way to increase profits.  “Radio has lost its luster because we have no act,” Wright told the reporter.

The story features more insights from Wright, along with interviews from a local artist who once had a chance to play one of her songs live on Wright’s program, and a listener who makes a point to flip over to the AM dial just for Wright’s program each week.