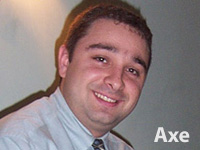 SYRACUSE — Brent Axe has been talking sports as host of On the Block every weekday afternoon for most of the past decade — first at the former SportsRadio 620 (WHEN) for Clear Channel, and since 2008, at Cumulus Media’s The Score 1260 (WSKO). But in less than two weeks, Axe will be stepping off the block. “The Axeman” opened today’s show by announcing his last day hosting the program will be next Friday, December 7.

Axe said he cannot yet reveal his future plans, but said, “I will still be local and I will still be in the media.” He additionally said he would not be going to another radio or TV station, but said he is still “dotting some I’s and crossing some T’s” before he can reveal the next chapter of his career.

Axe has hosted afternoons on AM 1260 since 2008, when the station (then WNSS) held the market’s ESPN Radio affiliation. Along the way, Axe had the chance to serve on the Buffalo Bills Radio Network team, and On the Block has been simulcast on the Time Warner Cable Sports Channel since 2009.

Prior to his arrival to the then-Citadel-now-Cumulus studios on James Street, Axe hosted On the Blockfrom 2002 to 2006 at SportsRadio 620 WHEN, replacing “Primetime” Adam Schein. After a round of budget cuts at Clear Channel, Axe joined syracuse.com as a sports blogger, a position he has continued even after joining his current station.

Going even further back, listeners in Utica may remember Axe as the host of the long-running SportsWatch on 950 WIBX, ascending to the host’s chair after serving as intern, and later producer, for former host Brad Davies.

Before that, Axe mentioned he got his first taste of radio at Z89 (WJPZ) in Syracuse.

Updated — Cumulus Media Operations Manager Tom Mitchell, who also serves as PD for WSKO (our apologies for previously inferring Axe is the PD; his correct title is Sports Director), tells CNYRadio.com, “The Score 1260 will continue with local programming weekdays 10am – 6pm.”

Regarding Axe’s eventual replacement, Mitchell said, “we have some strong talent in-house and we will be speaking with interested applicants from inside and outside the building before making our choice to fill the 2-6pm slot.”

Mitchell added, “we wish Brent well in his new gig, and we hope to keep him involved with The Score 1260 in the future!”