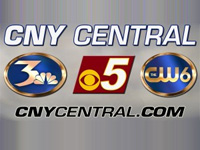 Updated 12/3 with a correction — SYRACUSE — Barrington Broadcasting, the owner of NBC3 (WSTM) and CW6 (WSTQ-LP), is reportedly nearing a deal to sell all 24 of its television stations in 15 markets nationwide. But it’s unclear how the deal could impact the two Syracuse stations — one national trade publication says the leading bidders include two companies which already have a presence in the Syracuse market.

Editor’s Note: New information has been added to the bottom of this article.  If you’ve already read the article before, click here to jump to the new info.  The new information makes references to parts of the article, so if you haven’t read it yet, you may wish to do so now.

Although TVNewsCheck‘s Jack Messmer says company officials would not provide any official comment, he attributes “multiple sources” for a Thursday report, which says Barrington has been “shopping” for a buyer. Messmer also identifies Nexstar and Sinclair as the most-likely buyers as the process moves into its “final stage.”

Just one snag: Sinclair already owns Fox 68 (WSYT) and handles day-to-day operations for My 43 (WNYS) through an agreement with owner RKM Media. Nexstar is expected to acquire NewsChannel 9 (WSYR-TV) as part of a multi-market deal announced in July, and approved by the FCC in October.

The Federal Communications Commission’s regulations on local station ownership limits state a single company may own two television stations in the same market, but only under certain conditions:

All of the aforementioned stations cover the greater Syracuse area, so we can skip the first condition and focus on the second.

Note: The following is mostly speculation

Although ratings data for the Syracuse market is not often made available to the general public, it is generally safe to presume that the “top four stations in terms of audience share” are those affiliated with what the FCC refers to as the “top four” broadcast networks: ABC, CBS, NBC and Fox.

Updated: Barrington currently operates NBC affiliate WSTM-TV.  While it also owns WSTQ-LP, a CW affiliate, our thanks to Scott Fybush from North East Radio Watch for pointing out that low-power television stations are not considered against the FCC’s ownership cap.  (We’ll note that CBS affiliate WTVH, also part of the “CNY Central” cluster, is technically owned by Granite Broadcasting. Barrington operates WTVH through a shared services agreement.)

Because Sinclair already owns Fox affiliate WSYT, it’s expected that the FCC would only approve a Sinclair purchase of Barrington’s Syracuse properties if Sinclair agrees that it would sell-off either WSTM or WSYT. Such an arrangement may or may not have an impact the SSA Sinclair has in place to operate MyTV 43 (WNYS), since it’s also expected that whomever buys WSTM will likely maintain the SSA with WTVH.

Updated: Over the weekend, Nexstar closed on a deal it announced in July, to purchase WSYR-TV and several other stations currently owned by Newport Television.  That virtually eliminates our earlier theory of Nexstar possibly backing out of the deal in favor of purchasing Barrington’s portfolio, but it doesn’t entirely eliminate the theory of Nexstar somehow having a hand in things.  That’s thanks to the possibility (unlikely as it may be, it’s still possible) of Mission Broadcasting coming into the mix. As noted by Wikipedia, Mission only owns stations in markets where Nexstar is present, and all of Mission’s stations are controlled by Nexstar through joint services agreements. In the Utica market, for example, Nexstar owns Fox affiliate WFXV and MyNetworkTV 11 (WPNY-LP), but operates ABC affiliate WUTR through an agreement with Mission.

It might be a stretch to imagine a scenario where Nexstar buys channel 9, while Mission buys channels 3 and 6 and still continues to control Granite’s channel 5. But since the three are technically separate companies, it could satisfy FCC regulations.

There’s also a possibility that none of the above companies will purchase WSTM and WSTQ-LP from Barrington. A similar situation exists in the earlier sell-off of Newport Television. While Newport said most of its stations would be sold to Nexstar, Sinclair or Cox Media, at least two stations were left out of the mix:

CNYTVNews.com has contacted CNY Central Vice President and General Manager Chris Geiger to request confirmation, denial or any other comment regarding the report. We have not received a response. (As always, we’ll update the story if/when any response is received.)

Of course, even if no confirmation is provided directly by station officials, all pending station sales eventually become public information when filed with the FCC. We’ll keep you posted.

Added 12/2:  We’ve heard from an anonymous CNYTVNews.com reader who claims to have knowledge of a staff meeting which was held on Friday at CNY Central.  (Before hearing from this tipster, we had already heard from another source that a meeting was planned.)  Our tipster claims Chris Geiger told staff that parts of the aforementioned TVNewsCheck article were incorrect, specifically regarding cable/satellite retransmission agreement fees.  (Geiger reportedly said Sinclair’s and Nexstar’s contracts are more competitive than the article stated.)  The tipster also claimed Geiger presented the same possible scenarios we’ve already described above, but stopped short of saying it was definitely down to either Nexstar or Sinclair, as Barrington is still exploring offers, with a preference to sell all of its stations to a single buyer.

Meantime, multiple sources have told us that Nexstar’s acquisition of Newport reportedly closed on Friday (with official announcements likely coming tomorrow).  If true, it seems as if this could tip the scales in favor of Sinclair, or perhaps another yet-to-be-named bidder, for the Barrington sale.

Many of the stories you read here start out as “insider tips” submitted by readers. Anytime you’ve got news to share, you can contact us in confidence at cnyradio@cnyradio.com or use our handy Contact Form, where you can send a message without providing your name and/or email address. Either way, all news tips are welcome with our utmost thanks, and all requests for anonymity are honored with the utmost regard.