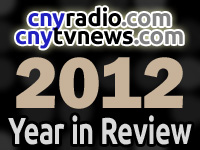 CENTRAL NEW YORK — Most New Year’s Eve traditions take place later tonight; ours takes place earlier during the day, when we look through a whole bunch of server stats to determine the Top 10 Stories that appeared on CNYRadio.com and CNYTVNews.com over the past 365 days.

We are pleased to report overall site traffic was up during 2012. According to Google Analytics, we had a 15% increase in “unique” pageviews compared to 2011, and readers spent 30% more time on the site this year than last year. Our sincerest thanks to everyone who shares stories on Facebook, Twitter and other social media networks, or through email.

Source: WordPress.com. “All-time” goes back to July 2008, when WordPress stats were first used.

Top 10 search terms: What readers wanted to know about the most

We’re always grateful for readers who stop by the site every day, or who keep an eye out for new stories via our RSS, Facebook or Twitter feeds. But there are plenty of readers who find the site through search engines like Google and Yahoo. Here are the top 10 search terms which brought users to CNYRadio.com and CNYTVNews.com during 2012:

Top 10 CNYRadio.com and CNYTVNews.com Stories of 2012

Without further adieu, we present to you, the ten most-viewed stories during 2012:
div class=’entry-header’>

We begin our countdown of the year’s most-popular stories with Kaylea Nixon’s announcement that she’s leaving NewsChannel 9, where she served as traffic reporter for the station’s morning newscasts, and as co-anchor of the station’s mid-morning talk show, Bridge Street. Nixon revealed that she and her husband were moving to Chicago, where he accepted a new job… but she would still visit Syracuse from time to time, as she’ll continue to appear in TV spots for a local car dealer. Former WUTR/WFXV anchor Caroline Gable immediately took over Nixon’s early morning traffic duties, and would eventually begin to appear on Bridge Street. END_OF_DOCUMENT_TOKEN_TO_BE_REPLACED

About five months before Caroline Gable arrived at NewsChannel 9, she suddenly disappeared from the anchor desk at WUTR and WFXV’s Eyewitness News operation in Utica. News Director Joe Parker confirmed Gable’s exit for CNYTVNews.com, but stated Nexstar corporate policy barred him from providing any further comment or explanation. Gable was the primary co-anchor, alongside Parker, for the first several months of “Eyewitness News,” which launched in September 2011, ending a nearly decade-long hiatus of local newscasts at WUTR. Gable was also the solo anchor of a 10pm newscast on Fox affiliate WFXV. Before joining WUTR and WFXV, Gable was a reporter and anchor across the street (literally) at NBC affiliate WKTV. END_OF_DOCUMENT_TOKEN_TO_BE_REPLACED

After spending the better part of 16 years in sports talk radio, Brent Axe dropped a bombshell on fans last month, when he announced he’s leaving broadcasting. His show, On the Block, aired on 620 WHEN from 2002 to 2006, and later on The Score 1260 (WSKO) from 2008 to 2012. For the last three years, the show had a TV simulcast on Time Warner Cable Sports Channel. On his last show in early December, Axe revealed he accepted a full-time position with syracuse.com, as a sports community engagement specialist. It’s one of many new positions created as syracuse.com and the Post-Standard carry out a major restructuring that will place more emphasis on the group’s online brand. END_OF_DOCUMENT_TOKEN_TO_BE_REPLACED

After many years on CBS 5 (WTVH), the highly-popular game shows “Wheel of Fortune” and “Jeopardy!” moved up the dial to Fox 68 (WSYT). Although the change didn’t take effect until the new television season started in September, the Fox affiliate started promoting the move in June. Among the benefits of the move: Fox 68 said both shows will be offered, “for the first time, in crisp and clear HD,” as opposed to the close-but-not-really-HD “enhanced widescreen” in use at CBS 5. END_OF_DOCUMENT_TOKEN_TO_BE_REPLACED

We didn’t have to wait long for the first major radio format flip of the year: Cumulus Media pulled the plug on “105.9 The Big Talker” just six days into 2012. The TV theme song stunting that preceded the talk format just a little less than two years earlier was back for another visit. At 1:05pm, the new rock format of “105.9 The Rebel” was unveiled. Aside from the syndicated “Bob and Tom Show” mornings, a holdover from the talk format, the station started out jockless. Since then, longtime local rock jock Dave Frisina has been added for afternoons, and Syracuse New Times music editor Jess Novak was added to host middays. END_OF_DOCUMENT_TOKEN_TO_BE_REPLACED

Even though the New York State Fair takes place outside of the four TV ratings periods that take place each year, local TV news operations treat the Fair like a ratings period: all hands on deck, with little or no exception. So it was very notable when WSTM primary co-anchor Jackie Robinson was absent from the station’s live coverage from the fair, and from the schedule of autograph sessions attended by other reporters and anchors. On the Friday before Labor Day, CNY Central finally explained Robinson’s absence by announcing her retirement from the station, wrapping up a 34-year career which took place entirely at WSTM. She would only appear live on WSTM once more, to anchor her final 90-minute newscast on September 4. END_OF_DOCUMENT_TOKEN_TO_BE_REPLACED

#4 : K-Rock TV ad refused by 3 stations for being “inappropriate”

Soon after Hunter Scott and Josh Grosvent settled in as the new morning hosts at K-Rock (WKRL/WKRH/WKLL), a TV spot was produced to promote the show. But it didn’t air on CNY Central’s three stations, NBC 3 (WSTM), CBS 5 (WTVH) or CW 6 (WSTQ-LP). Ed Levine, CEO of K-Rock owner Galaxy, told CNYRadio.com the spot was deemed “inappropriate” by the TV stations’ management, a decision he disagreed with, wondering if “the geniuses behind this decision ever watch their own networks.” END_OF_DOCUMENT_TOKEN_TO_BE_REPLACED

Nexstar Broadcasting Group certainly made an impression when it finally closed on its purchase of Syracuse ABC affiliate NewsChannel 9 (WSYR-TV) and eleven other stations formerly owned by Newport Television. The company informed several back office staffers that their jobs would be coming to an end just after the first of the year, as their functions would be absorbed by existing Nexstar staff in Rochester. Also gone: the program director and chief engineer who each worked at channel 9 for decades, and all part-time news photographers. END_OF_DOCUMENT_TOKEN_TO_BE_REPLACED

One of two annual K-Rock events to make this year’s countdown, this year’s Dysfunctional Family BBQ lineup announcement ranked #2 on the list. That’s up a few notches from last year, when the 2011 DFBBQ lineup announcement was the 5th most popular story. This year’s event, held on May 27 at the State Fairgrounds, was headlined by Flogging Molly. It was the celtic punk rock band’s first-ever appearance in Syracuse. END_OF_DOCUMENT_TOKEN_TO_BE_REPLACED

For at least the third year in a row, fans looking for the lineup at K-Rock’s annual K-Rockathon concert racked up enough visits to make the annual lineup announcement the #1 story here. KoRn, The Offspring and P.O.D. were among the headliners in the announcement made by K-Rock on June 4. In the days leading up to this year’s announcement, we noticed an increase in views for our stories about K-Rockathon lineups from previous years, as fans were apparently thinking they missed the announcement, even though it hadn’t been made yet. END_OF_DOCUMENT_TOKEN_TO_BE_REPLACED

Earlier this month, we asked readers to chip in with their picks for the year’s biggest stories. Among the stories mentioned: Hunter Scott and Josh Grosvent’s move from Cumulus Media’s 95X (WAQX) to crosstown rival K-Rock, owned by Galaxy Communucations.
One reader said she never saw it coming, considering the way the duo used to frequently bash K-Rock when they were on 95X.

Over the course of a little more than a month, we watched as the hosts resigned from 95X and resurfaced at K-Rock later that week, only to wonder if they’d be able to keep their new jobs as Cumulus Media took them to court. CNYRadio.com published several stories on the developments. Although no one single story garnered enough hits to make our top 10 countdown, the combined total from all of the stories beat our #1 story by nearly 500 views. Here’s a recap of those stories: