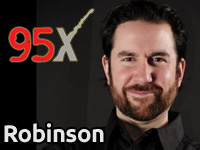 SYRACUSE — It’s a new but familiar voice on mornings at 95X (WAQX), as the Cumulus-owned active rocker debuted The Robinson Show today.  The new wake-up host worked for 95X once before, as the station’s night host in 2003.  In between, he’s been working at Rochester stations WCMF and WBZA.

Starting with today’s debut, Robinson will continue to host weekday mornings from 6am to 9am, followed by a jockless hour of “All Rock Radio,” before PD/midday host Joe D enters the studio at 10:00am.  Big Smoothie, who had been filling-in on mornings since the shift became vacant in October, gets to change his alarm clock back to the normal time, as he resumes hosting The People’s Show in its original afternoon drive timeslot, 2-7pm.  And Scott “dXn” Dixon is also back to his original shift, 7pm to midnight.

In a press release, programmer Joe D said, “we’re really excited about The Robinson Show and we know the 95X listeners will really like Robinson’s brand of humor and what he brings to morning radio.”

Cumulus Syracuse VP/Market Manager Shane Bogardus said, “Robinson was engaging and eager to come back home to Syracuse from our first conversation. He instantly fit the attitude of the station and his talents in producing a real and raw morning show strengthens the lineup each day to deliver the music and entertainment the 95X listener has come to expect.”

95X had been on the hunt for a new morning host since previous hosts Hunter Scott and Josh Grosvent resigned in mid-October, claiming they were both leaving radio for good — only to resurface at Galaxy-owned crosstown competitor K-Rock (WKRL/WKRH) by the end of that same week.

The hosts said Cumulus issued “cease and desist” orders in an attempt to stop the move, but signed-on with K-Rock anyway,with the blessing of Galaxy management.  Cumulus later took the pair to court, where a judge said they could continue to work for K-Rock, but would have to stop using certain terms and phrases deemed to be “intellectual property” of Cumulus, including their former program title, “The Show.”

We’re a bit late on this because, we’re not quite sure when we first noticed it — or if we were seeing things.  But if you haven’t noticed, there’s a new online look for all four of Cumulus Media’s Syracuse stations.  Earlier this week, national radio industry journalist Tom Taylor noted the changes himself, comfirming our suspicion; all Cumulus stations nationwide received the web facelift at the same time.  Previously, 95X and its sister stations were still running websites that were created under the cluster’s former Citadel Broadcasting ownership.  Cumulus acquired Citadel in late 2011.

All four station sites have a similar look, including a banner across the top which features the name of the currently-playing song, the current on-air talent, and a prominent link to listen live via iHeartRadio, a result of Cumulus Media’s partnership with iHeart creator Clear Channel.  The only exception is sports talker The Score 1260 — instead of showing a current song, the banner features the name of the current talk show, and the next two coming up later.

You can find links to every radio station website in the market on our Syracuse station list (in the menu at the top of the site) anytime, but for quick reference, here are links to check out the new sites for the Cumulus stations: