UTICA-ROME — With the recent news about WIBX’s locally-produced SportsWatch ending last week, after more than 40 years, it seemed timely and fitting that we happened to receive this photo.  It features former SportsWatch host Tom Coyne, who had moved on to hosting The Talk of Central New York by the time this photo was taken in 1985. 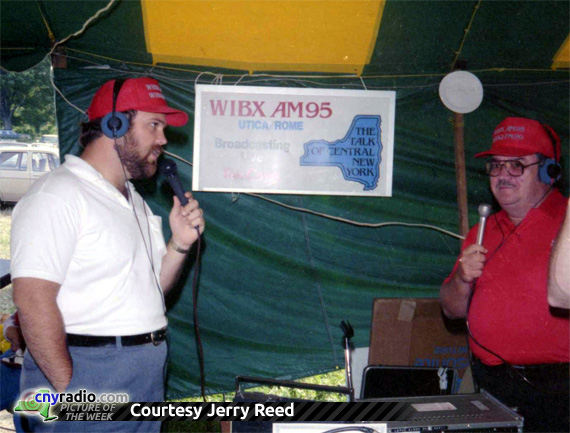 Longtime local broadcaster and voiceover artist Jerry Reed tells CNYRadio.com he recently found this shot while going through some old negatives.  That’s Coyne on the left, with John (Jerry) Ashwell on the right.  Reed says the photo was taken during a live remote broadcast from the CNY Farm Progress Show near Mohawk.  The hats both are wearing read, “WIBX AM 95 / WIBQ FM 99.”

Earlier this week, we were fortunate to hear from Coyne and several others who hosted SportsWatch at some point during the show’s four-decade run on WIBX.  Even if you already read “Former WIBX hosts offer ‘SportsWatch’ post-mortems” from Wednesday, take another look — we’ve since heard from Adam “the Bull” Gerstenhaber, and original host Lee Hamilton added to his earlier statement.  There have been some other updates throughout the article, as well as a new sidebar highlighting a few of the hosts who made it to “the big leagues” after starting out at WIBX.

We’re always interested in taking a look at what’s happening now inside local radio and television — or a look back at a notable blast from the past, as we did this week.  Send those photos to cnyradio@cnyradio.com or upload through the Contact Form.  There’s a new Picture of the Week right here every Friday at 7:00am.