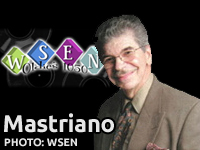 SYRACUSE — Longtime local broadcaster Dick Mastriano has been let go from his post as morning host for Oldies 1050 (WSEN).  Management at the station, owned by Leatherstocking Media Group, confirms for CNYRadio.com that Mastriano’s duties will be absorbed by another staffer as a result of budget-tightening.

General Manager Don Wagner — who came up through the ranks on programming side of the business, rather than the sales side that produces most GMs — tells CNYRadio.com, “I would much rather add talent than take it away, however, cash flow is the ultimate decider these days, as it was in this case.”

Mastriano was assigned to the morning shift on what used to be Oldies 1390 (WFBL) in 2009.  Later that year, the station moved down the dial and became Oldies 1050 (WSEN), when Leatherstocking decided to make WFBL the flagship of its three-station, two-market “CNY Talk Radio” network.

Prior to joining WFBL, Mastriano worked at a number of Syracuse stations including WPAW (now WSIV), WRHP (now WWHT) and WEZG (now WKRL).  He also spent some time on the weekend rotation at Utica’s WLZW.  During the 1970s, Mastriano was News Director for WNDR (now WSKO) and WFBL, and served as president of the Syracuse Press Club in the late 70s.  Before starting his career in commercial radio, Mastriano worked with Armed Forces Radio-TV while serving in the U.S. Army.

Thanks to a CNYRadio.com reader who provided the initial “news tip” that allowed us to look into this story.  Anytime you’ve got news to share about the goings-on inside local radio or TV, we’re always appreciative for your messages to cnyradio@cnyradio.com or use the Contact Form.