SYRACUSE and UTICA-ROME — It’s a double feature for our Picture of the Week.  Up and coming country music star Jenna Jentry is touring the country and recently visited two area radio stations.  And while doing some background research about the singer, we found out she’s got roots here in Central New York. 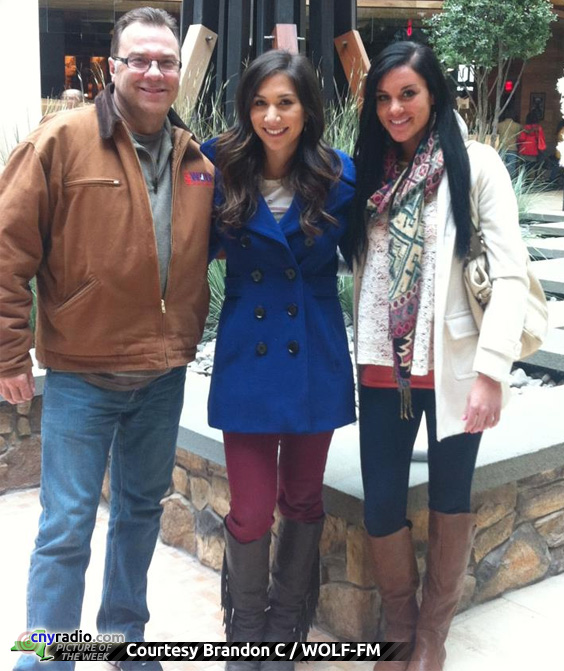 New Country WOLF 105.1 webmaster Brandon C sent in this photo last week.  That’s Jenna Jentry in the middle, flanked by afternoon drive host and PD Skip Clark, and midday host Taylor Smith.  Brandon tells us Jentry gave a live interview and performed one of her songs during Smith’s show last Thursday.  Afterwards, Jentry and the WOLF-FM staff headed over to the nearby DestinyUSA mall for lunch.  They also got a sneak peek inside “Toby Keith’s I Love This Bar and Grill,” currently under construction at the mall.  (And while we’re on the topic, still no official opening date announced by the restaurant yet, but one band says it’s scheduled to perform there on February 8 and 9.) 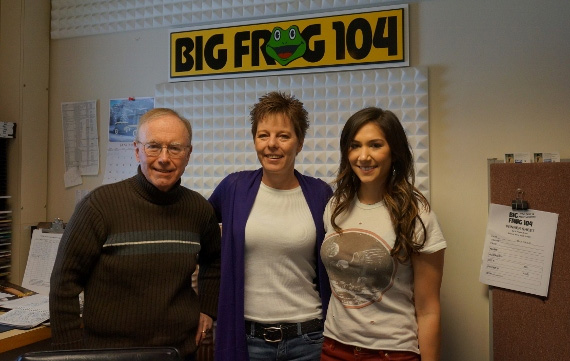 Jenna Jentry also stopped in Utica to chat with the crew at Big Frog 104 (WFRG) last week.  We didn’t know about it until we Googled to find some info about Jentry… and the search turned up an article on the station’s website, with the above photo with morning co-host Polly Wogg, and midday host Greg “Splashin'” McShea.  According to the article, Jentry “may have grown up in Texas and now calls Nashville home, but she’s no stranger to Central New York.  Her father is from Clinton and her mother called Rome home.”

Thanks to Brandon C from New Country WOLF 105.1 for sending in the first of the two photos above!  We’re always interested in having a chance to see what’s happening today inside local radio and TV stations… or notable blasts from the past!  Just send your shots to cnyradio@cnyradio.com or upload via the Contact Form.  There’s a new Picture of the Week every Friday at 7:00am!