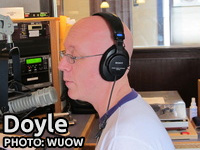 Updated 5:40pm with additional detail — ONEONTA — In an age where many radio station playlists are heavily influenced by national-level managers and consultants, Terry Doyle gave local musicians the chance to get some radio exposure.  Unfortunately, colleagues at 88.5 WUOW in Oneonta and 91.3 WIOX in Roxbury are mourning Doyle’s death, this past Wednesday at the age of 46.  His weekly program, “Imprint,” also aired on Ithaca’s 88.1 WRFI.

In addition to “Imprint,” Doyle also hosted “Crackle,” four days a week, on community radio station WIOX in Roxbury, in Delware County, east of Oneonta.  On his Facebook pages for both shows, Doyle had announced in late January that he had suffered a heart attack.  The day before he passed, Doyle posted a lineup of upcoming guest hosts for “Crackle,” and announced he would skip “Imprint” for the week, and planned to have another show the following week.

According to an obituary in The Daily Gazette from Schenectady, Doyle earned a bachelor’s degree in broadcasting in California and worked there for a time, before heading east, to work at stations in Cobleskill, Oneonta, Walton and Delhi.  In 2005, Doyle started working full-time outside of radio, but devoted much of his spare time to Roxbury-based community radio station WIOX.

In December 2012, Doyle was the first to receive the annual WIOX “Above and Beyond” award, for a station volunteer who went above and beyond the call of duty.  From a blog post on the station website:

Terry has gone above and beyond — running three miles in the rain from his home to the station to assist in crisis coverage, tracking down elusive newsmakers, performing marathon stand-by duty whenever needed, parading an incredible coterie of live performers to the station from virtually everywhere, introducing WIOX to Catskill Cabaradio; Terry has been the station’s biggest ambassador and more.

Gary Wickham of SUNY Oneonta wrote in to inform us of Doyle’s passing.  He shared this letter, which he sent to listeners:

To our radio family;

It is with sadness that I announce the passing of our good friend Terry Doyle.

Terry hosted the Imprint program on WUOW for the past 6 years but my professional relationship with Terry goes back a lot longer.

Terry cut his teeth as a reporter and news anchor for Amos Finch and the old Delaware Broadcasting group operating out of Walton. The guys working with him in the old days can tell you stories of Terry spending the night in that old drafty studio atop Bear Spring Mountain in order to be on the air at sign on. There was usually a sleeping bag and change of clothes anywhere he worked.

Ownership changes several years ago drove Terry from commercial radio, but he still had a passion for broadcasting and more importantly, regional music. This love of all things music was the driving force behind “The Imprint Program”. Every show started and ended with Rubberband’s “Grisman Stomp, and packed between were interviews with local artists, lots of music and of course, Terry.

Terry lived for local community radio (the kind we grew up with) and though we were the first terrestrial station to air “Imprint”, it wasn’t long before his show aired on stations in Ithaca, Geneva and Hudson.

The sign-on of another community broadcaster in neighboring Roxbury gave a Terry a whole new audience and format. WIOX carried not only “Imprint” but a new almost daily show aptly named “Crackle with Terry Doyle” He was never short of ideas, never short of conversation and never afraid to interview an artist or anyone else for that matter. If there was music, Terry was never far away. Whether it was the Northeast Folk Alliance shows, a blues fest or West Kortright, he was always there with his trusty recorder. Amazingly enough, he did this all while maintaining an actual full time job that had nothing to do with music or radio.

Our condolences go to Terry’s family, our friend Joe Piasek and the gang at WIOX and mostly to his listeners.

My best to you always and thanks for listening
Gary

Friends, family and fans of Terry Doyle can pay their respects at Miller Funeral Home on Main Street in Roxbury on Tuesday February 12th.  Viewing hours are from 4:00-8:00 pm.
Funeral service will take place at St. John’s Episcopal Church on Main Street in Delhi on Wednesday February 13th at 2:00 pm followed by a gathering in the community room. Although not required, feel free to bring a dish to pass.
Terry’s family suggests that in lieu of flowers, donations be made to WIOX to continue support for local musicians.

According to a blog post on NoDepression.com — which has nothing to do with depression, but is the title of a magazine-turned-website covering alternative-country music — Doyle passed at his parents’ home in Middleburgh, NY, as a result of complications following the aforementioned heart attack.  He is survived by his parents, three brothers, two sisters  and several nieces and nephews.

CNYRadio.com wishes to extend our condolences to Terry Doyle’s family, friends and colleagues.