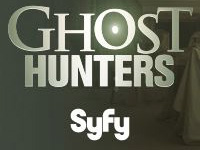 SYLVAN BEACH — Could it be possible that the haunts in the “Laffland” ride at Sylvan Beach Amusement Park aren’t entirely fake?  The cast and crew of the SyFy series “Ghost Hunters” visited to investigate.  Next week, they’ll reveal their findings on national television.

A spokesperson for Empire Attractions, which owns the amusement park and the adjacent Yesterday’s Royal restaurant, says cast members and a production crew visited Sylvan Beach last fall.  They combed the grounds, shoot video and looking for evidence of paranormal activity.  Their findings will be revealed next Wednesday, February 27, at 9:00pm Eastern.  SyFy is available to cable and satellite subscribers.

Doug Waterbury, who bought the two tourist hot-spots in 2007, says he was “intrigued by the frequent comments” from employees, customers and local residents, regarding an increasing number of ghost sightings and other paranormal activity.

In a press release he said, “It may be possible that the spirits are becoming more active due to the recent change of ownership, and I want them to understand that my intention for the future is to preserve the amusement park in every respect and to welcome their continued presence as we learn to peacefully co-exist.”

Park officials said SyFy producers told them Sylvan Beach was “among their favorite subjects due to the uniqueness of the park and surrounding areas, which offered an unusual historical twist.”