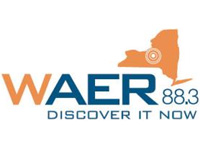 SYRACUSE — She has performed with big names like Beyoncé and Nancy Wilson, and soon, modern jazz artist Tia Fuller will be performing in Syracuse.  WAER-FM 88.3 announced today, the acclaimed saxophonist will headline its Jazz Appreciation Month celebration in late April.

The concert is set to take place at the Palace Theater in Syracuse’s Eastwood neighborhood on Sunday, April 28 at 3:00pm.  Tickets are $20 each, or $15 for WAER members or anyone with a valid Syracuse University ID card.   WAER, a 50,000-watt NPR affiliate, is owned and operated by Syracuse University.

WAER General Manager Joe Lee said in a press release, “unlike many major urban areas in the country, Syracuse is fortunate to have a radio station dedicated to preserving the legacy of jazz.” He said he hopes Jazz Appreciation Month will encourage the community to reflect on the genre, which he argues, is “not widely appreciated and celebrated in America, its birthplace.”

More information about Tia Fuller from the WAER press release:

Fuller is known for her artful mastery of the saxophone. She has performed with R&B star, Beyoncé and is featured on the Beyoncé Experience DVD. She has also played with Esperanza Spalding, Jon Faddis, T. S. Monk (son of Thelonious Monk), and Nancy Wilson. In her own right, Fuller has released four of her own albums, the most recent being Angelic Warrior in 2012. A review in The Washington Post admires the record’s “duality,” praising that some songs “embody warrior energy” while others “sound ethereal and angelic.” The review suggests that Fuller is “forging new ground for women in jazz.”

Thanks to WAER and many other local radio and TV stations for including cnyradio@cnyradio.com on their press release distribution lists.  That’s the easiest way to let us know what’s happening at your station.  Our Contact Form is also available.