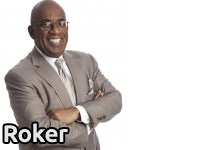 NEW YORK CITY — Many Central New Yorkers know the Today show’s Al Roker got his start at WTVH, while attending classes at SUNY Oswego.  But did you know he’s got “the C-word” to thank, in part, for boosting his career?  Yep, that C-word, the one you can’t say on TV.  One night, somebody else did — and the rest is history.

Roker shared the story with MediaBistro for the website’s “My First Big Break” series.  Here’s the video, so you can watch for yourself.  If you’re strapped for time, we’ve got the main points below.

Right off the top of the video, Roker recalls one evening when he was at WHEN-TV (channel 5’s call letters at the time) when a weatherman, live on the air, tried to say, “we have a cold front coming out of Canada.”  But instead of saying “front,” the man — who Roker didn’t name — accidentally said “a word that rhymes with front… that is a fairly offensive word.”  To make matters worse, when the weatherman realized what he had said, he stopped and exclaimed, “I didn’t mean to say ****, I meant to say front!  Not ****!”

Roker recalls News Director Andy Brigham — having witnessed this in the control room — telling Roker, “go back up to school, get your clothes, you’re doing the eleven.”

Of course, Roker wasn’t just randomly standing around at the station when the incident happened.  The video cuts back to explain the background.

About a year before the “big” break, Roker had a smaller break.  Dr. Lewis B. O’Donnell, the communications department chair at SUNY Oswego, was also working at channel 5.  When the station decided to launch weekend newscasts, Brigham asked O’Donnell if he knew any students who might be interested in doing weather or sports.  That led to Roker being hired, for $10 per newscast — $40 per weekend.

Roker told the MediaBistro crew he would pick up his paycheck on Fridays afternoons and stick around to watch the 6pm newscast.  One of those Fridays, the C-word slip happened.  Roker said the weatherman was suspended for two weeks, but even after that, he never returned.  Roker was promoted into the position.  After graduating from SUNY Oswego in 1976, Roker landed gigs in Washington and Cleveland, before making his way back to his native New York City.

Offering advice to future broadcasters, Roker suggests, “make sure you’re as diversified as possible.”  He points to his own experiences beyond the Today show — as an author, a producer and a radio host, among other ventures.  He also advises, “don’t be a jerk.  OK?  Because… especially if you’re on your way up.  Because you’ve gotta always come down, and you’re see others probably on the way down, that you were a jerk to on the way up.”