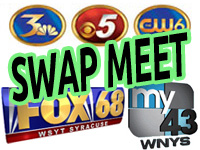 BALTIMORE, MD — Sinclair Broadcast Group, the owner of Syracuse’s Fox 68 (WSYT) is buying NBC3 (WSTM-TV) and CW6 (WSTQ-LP), as part of a $370 million deal that involves a total of 24 stations in 15 markets.  To satisfy FCC ownership limits, Sinclair plans to sell WSYT.

In a press release issued by Sinclair Broadcast Group today, the Maryland-based company said it plans to buy all 18 stations in Barrington’s ownership portfolio.  Sinclair says it has also “entered into agreements to operate or provide sales services to another six stations.”  Among those, Sinclair will assume operations of CBS5 (WTVH).  The CBS affiliate is owned by Granite Broadcasting, but has been operated by Barrington through a shared services agreement since 2009, when CBS5 moved into the WSTM/WSTQ building and the stations collectively became known as “CNY Central.”

Because FCC ownership limits would not permit Sinclair to own WSTM-TV and WSYT together, the company said it plans to sell WSYT.  Sinclair operates My43 (WNYS-TV) through a local marketing agreement with RKM Media.  Sinclair says it also as a purchase option on the station.  The LMA and option will also be transferred to the future new owner of WSYT.

So, in the end, there will be no changes in any “alliances” between stations — WSTM and WSTQ will remain partnered with WTVH at 1030 James Street, while WSYT and WNYS will remain together just down the block at 1000 James Street.

No word yet on whether the transaction will result in any staffing changes.

Rumors of a possible sale of Barrington Broadcasting’s portfolio of stations started to circulate last November, when TVNewsCheck reported Sinclair and Nexstar (the owner of NewsChannel 9 WSYR-TV) as the frontrunners for the deal, which in its “final stages” at the time.  Considering both companies already own TV stations in Syracuse, we had speculated that either scenario would almost definitely involve a chain reaction of other stations being sold or transferred in order to satisfy FCC ownership limits.

So, the next question is — if the deal gets FCC approval, who might be in line to buy WSYT and take control of WNYS?  Share your thoughts in the comments below, with your Facebook account or with your free CNYRadio.com login.

Thanks to a CNYTVNews.com reader who spotted the press release and alerted us to this news.  We’re always grateful for your news tips at cnyradio@cnyradio.com or via the Contact Form, which you can access anytime by clicking “Contact Us” at the top of the page.