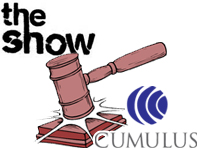 SYRACUSE — The show that prefers to call itself “The Show” wasn’t allowed to be “The Show” for the past 90 days.  But today, the expiration of a legal injunction allowed the morning crew at K-Rock (WKRL/WKRH/WKLL) to regain its identity as “The Show.”

Co-hosts Hunter Scott and Josh Grosvent said they’re happy to resume using the name they created during their two years on the same shift at 95X (WAQX).  When the pair suddenly walked from the Cumulus station in October, only to resurface across town at Galaxy-owned K-Rock by the end of the week, Cumulus took them to court.

A judge ruled Scott and Grosvent were within their rights to leave 95X and go to work for K-Rock.  But in November, the judge issued a 90-day injunction, barring the pair from using the term “The Show,” their drug-pushing character “Chalkdust” and the title of their “Beer Friday” segment, on the grounds that they were created on Cumulus time and belonged to the company, rather than the two hosts.

Today, that injunction expired.  Although an insider says the battle is not completely over yet, Galaxy CEO and President Ed Levine said in a statement today, “It’s gratifying beyond words to have given Cumulus the beating of their lives.  I can’t think of a broadcaster that deserves it more.”

In addition to referring to themselves as “The Show” again — Scott explained he hates the idea of doing a morning show called “Somebody and Somebody” — the hosts brought back their “Beer Friday” segment with Empire Brewing Company brewmaster Tim Butler, which had temporarily been called “Beer Day Before Saturday.”  This morning’s broadcast also featured an appearance from “Chalkdust,” with the hosts explaining he had been released from prison.

Cumulus Media Syracuse market manager Shane Bogardus was contacted by CNYRadio.com for comment today, but he did not respond to our email.

One Comment to K-Rock hosts regain use of “The Show” name, other temporarily-banned items