Updated with more info — LOS ANGELES — These three men attended a taping of the sitcom Two and a Half Men last September.  And what do they have in common?  They’ve all worked in Syracuse radio together. 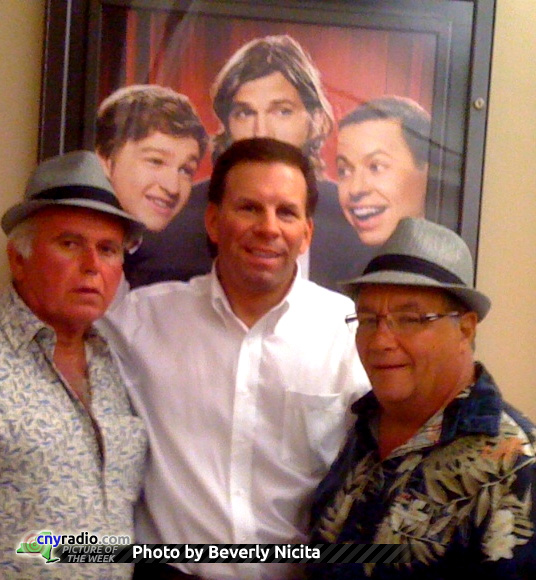 Carl Knight submitted this picture of himself (at right), along with Ron Curtis, Jr. (center) and Bob Paris (left).  The trio attended the taping in late September 2012 at the Warner Brothers studios in Los Angeles.  Knight tells CNYRadio.com he and Paris worked together at WSEN and WNDR during the 1970s.  Curtis, Jr. and Paris were colleagues at TK99 (WTKW) and other local stations during the 80s and 90s.

Editor’s Note: Some of you may have noticed this photo appeared briefly last Friday.  Thanks to Mrs. CNYRadio for noticing that your editor had somehow scheduled two different “POTW” items for the same date!  Thankfully, the error turned out to be fortuitous — just this week, Carl sent another email with more details about what these three guys are up to these days:

Today, Knight lives in Venice Beach, CA, and the other two men made the trip out west to visit him last fall.  Knight tells us, “Bob really wanted to see a taping of Two and a Half Men, so I was able to snag some tickets to one of the first shows of the season.”  These days, Knight primarily works as a traffic officer for the Santa Monica Police Department, but keeps his pipes warm with some voiceover production work out of Venice Beach.

Bob Paris works in retail in the Syracuse area.  Carl says he and his wife try to visit Syracuse at least once a year, and when they do, they stay with Bob and his wife, Linda.  This year, Carl says he’s hoping to visit during the State Fair — he hasn’t been since he left WNDR for California in 1979, and his wife Beverly has never experienced the event.

And of course, longtime Syracuse residents remember Ron Curtis, Jr.,  the son of the late, great Ron Curtis, who anchored the news for many years on WTVH.  The younger Curtis appeared on WTVH quite a few times in years past himself, most notably as host of the late night “Freaky Flix and Food.”  Today, he’s a voiceover artist for a production company in New York City.

Oh, and one more connection — Carl Knight says he still has family in Syracuse, including a connection to local radio: his cousin’s daughter is Brittany on The Robinson Show on 95X (WAQX), and she’s also the model for the front cover and the December page of the 2013 edition of the 95X Girlfriends calendar.

Our thanks to Carl Knight for sending the photo, and wife Beverly Nicita for snapping the shot.  And our apologies to everyone involved as well… Knight sent this photo to us the day after it was taken, about four months ago.  Your editor somehow overlooked it at the time, and recently discovered by chance while cleaning out old messages.

We’re always looking for more Pictures of the Week — so we’re not quite sure how we missed this one when it first arrived, and we don’t intend to allow such a delay to happen again.  Gatherings of CNY broadcast alumni are just one of many types of photos we enjoy featuring here; the door’s always open for photos of current events at your local radio or TV station, or for a notable “blast from the past.”  Just send those shots to cnyradio@cnyradio.com.  There’s a new Picture of the Week every Friday at 7:00am.

← Celebrating 12 years of CNYRadio.com
K-Rock hosts regain use of “The Show” name, other temporarily-banned items →