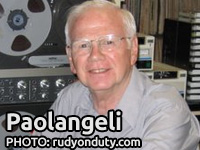 ITHACA — For many people, retirement provides an opportunity to pursue new interests that we couldn’t realize while working full-time. So what has Rudy Paolangeli been doing since he retired from full-time duties at WHCU in 1988? More radio! This Sunday, it’ll be exactly 25 years since his weekly post-retirement show started… and he’s never missed a single week.

Paolangeli retired as GM and morning host at WHCU on January 22, 1988. It didn’t take long for the radio bug to bite again — on March 17, 1988, “The Rudy Paolangeli Program” returned to the airwaves. You can hear Rudy every Sunday from 8:07am (after the hourly ‘cast from CBS News) until 10:00am on WHCU 870 and 95.9. The program is also streamed at whcu870.com. If you prefer to sleep in, Paolangeli makes the audio available on his own website at rudyonduty.com.

So how did he get here? And how has he managed to produce 1,300 shows over the past 25 years without missing a single week? CNYRadio.com recently asked the Ithaca radio legend to share some of his insights.

CNYRadio.com: First, let’s go back to the beginning. Folks in Ithaca know who you are, but for readers elsewhere who may not be familiar, how would you describe your career in 30 seconds or less?

Rudy Paolangeli: I got the bug in my junior year at Ithaca High School. I built Ithaca’s first pirate radio station: WVLR-FM, the Voice Of The Little Red at 95.5. I was hooked. I knew what I wanted to do the rest of my life. It became “a labor of love”. I think I’ve done it all. Built 2 radio stations, managed 3, even taught part time at Ithaca College School Of Communications for 20 years. How many people you know look forward to going to work everyday? I did and still do!

CNYRadio.com: So you retired in January 1988, and by mid-March, you were back on the air with a weekly show. What prompted you to make a comeback?

RP: Many former listeners asked me if I plan to return to the airwaves, so I arranged to produce a two hour nostalgic music program every Sunday morning on WHCU.

CNYRadio.com: When you started “Rudy on Duty” in 1988, did you expect you’d still be doing the show 25 years later, or did you think it might be just something you’d do for a little bit and “really” retire?

RP: I thought I would try it for a few years, and see what the audience reaction would be. It was very positive, so here I am 25 years later and still “on duty”.

CNYRadio.com: What’s the process for putting together each week’s show? I assume you produce the entire thing in your home studio, but how do you choose what’s going to be on the show each week, and what’s your process?

RP: The program IS produced in my home studio on 2 CD’s. I consider the program “unique”. In that short two hours, I play original recordings from the 1920’s to today. Semi-classics, country, stage and screen, big bands AND features SING A LONG WITH MITCH, MARCH AROUND THE BREAKFAST TABLE,YOUR HIT PARADE, ONE HIT WONDERS, and THIS DAY IN HISTORY. My variety format for years has been play male, female, group and instrumentals in that order. .

CNYRadio.com: How long does it take to put together each show, and when do you usually have it finished and submitted to WHCU?

RP: It takes about 15 hours a week including recording and researching information. I also service my ten sponsors (most have been with me for 20 years). The program is produced on 2 CD’s early Thursday morning and delivered to WHCU by noon.

CNYRadio.com: Do you produce the entire show yourself, or do you have any helpers?

CNYRadio.com: Have you ever missed a week due to vacation, illness or anything else?

CNYRadio.com: On your website, you’ve got a map showing all the locations of people who have visited your website. Have you ever heard from listeners in far-away locales?

RP: Oh yes. Many of the dots indicate actual listeners…..could be for a half hour, hour or the entire program. Lots of wonderful e-mails from all over the world AND coast to coast.

CNYRadio.com: Is there anything particularly “special” planned for the 25th anniversary show?

CNYRadio.com: How long, altogether, have you been in radio?

RP: I started in radio as a part time combination announcer/engineer at WHCU in Ithaca in 1950. First full time job was in 1956 when I helped build WTKO in Ithaca, and worked my way up to assistant general manager. So with part and full time and retirement , I have been in this wonderful broadcasting business 63 years.

RP: Don’t know the author, but it’s great advice for future broadcasters: “Find a job you love, and you’ll never work a day in your life!”

Our thanks again to Rudy Paolangeli for taking the time to share his experiences! Again, his show runs every Sunday from 8:07am until 10:00am on WHCU 870 and 95.9. If you’re too far from Ithaca to catch the stations, there’s a live stream at whcu870.com. Paolangeli also posts the audio on his own website at rudyonduty.com.