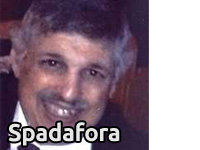 VERONA — Longtime Onondaga Community College radio instructor and local sports radio broadcaster Vince “Vinny” Spadafora has died at the age of 65.  His death is the result of a one-car rollover accident on Friday night.

New York State Troopers are investigating the cause of the crash, according to a story which appeared tonight on syracuse.com.  Troopers say Spadafora was headed east on Route 31 in Verona, when his car went off the side of the road and hit several trees before flipping over and landing on its wheels.  The Canastota resident was unresponsive when responders arrived, and declared dead at Oneida Healthcare.

According to his obituary, Spadafora served two Army tours in Vietnam, returned home to work his way through college to a Master’s degree, and worked for more than 40 years in local broadcasting.  In addition to teaching electronic media communication courses at Onondaga Community College, Spadafora worked in local radio.

Among his stints in local radio, one CNYRadio.com reader recalls Spadafora worked at the “Sports Stars Network” stations of the former Clear Channel cluster in Utica-Rome, and he called high school sports for many years on Oneida’s WMCR.

“Spaddy” is survived by his wife, four children and a son-in-law, two grandchildren and five siblings.  Calling hours will be offered at Campbell-Dean Funeral Home, Inc., 300 South Peterboro Street, Canastota, from 2-4pm and 6-9pm on Monday.  Funeral services will begin at the funeral home at 9:45am Tuesday, followed by a Funeral mass at 10:30am at St. Agatha’s Church on North Peterboro Street.  Interment will be made in St. Agatha’s Cemetery.

The family says contributions in Spadafora’s memory may be made to the American Cancer Society , PO Box 7, 6725 Lyons Street, E. Syracuse, NY 13057. Envelopes may be obtained at the funeral home.

CNYRadio.com wishes to extend our condolences to the many colleagues who’ve worked with, and students who’ve learned from Vinny Spadafora. You can share your memories, condolences and other thoughts by posting a comment below (after all these Twitter posts we’ve shared) using either your Facebook login or your CNYRadio.com login.

Terrible story about a great radio guy and teacher… fb.me/1YBpSyVzQ

@billkeeler1 Shared the press box with Vinny many times. Prayers and best wishes for his family.

R.I.P. Vinny Spadafora, I will never forget your teachings about sportscasting but more important about life #enjoyparadise #youwillbemissed

Its gonna be a long weekend that’s for sure. You will be greatly missed Vinny Spadafora. You were an amazing teacher!

Very, very sad to hear about the passing of one my favorite professors Vinny Spadafora. Thoughts and prayers out to his family. #RIP Spaddy

R.I.P. Vinny Spadafora, you will be missed

One Comment to Veteran broadcaster Vincent Spadafora dies in crash