UTICA-ROME — Just a little over a week since the Mohawk Valley was jolted by a deadly shooting rampage, an unprecedented effort by local broadcasters.  Journalists and disc jockeys set competition aside to help raise money for community organizations that are helping victims of the horrific events of March 13.

Broadcasters from several local stations gathered to videotape a series of public service announcements, encouraging residents to donate to a special “Valley Support Fund” which has been established, to help the aforementioned organizations. 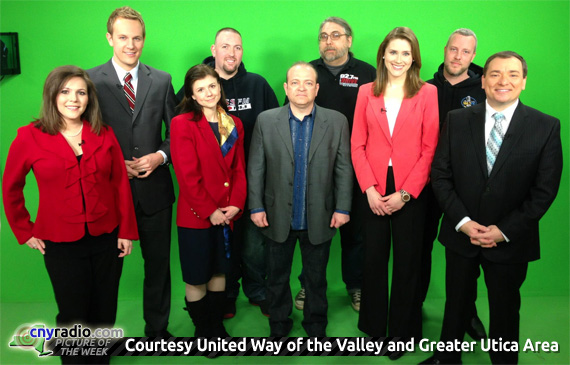 The group gathered at the WUTR/WFXV studios on Smith Hill on Wednesday, to record a series of PSAs.  The message: viewers and listeners can donate $10 to the “Valley Support Fund” by simply texting the word UNITED to the number 52000.  The donation will simply be added to your cell phone bill.  (Keep reading – we’ve got links to some video clips later in the story so you can see why they used the chroma-key wall.)

After the studio session, post-production was quickly underway and four TV versions of the PSA were ready for air that same night.  Two versions are airing on NBC affiliate WKTV and CW11 (WKTV-DT 2.2), while the other two can be seen on ABC affiliate WUTR, sister station Fox 33 (WFXV) and MyTV affiliate WPNY.  A number of radio PSAs are also being produced, as well as some print ads.  The entire campaign will run for one month, ending April 21.

How it all came together

Fundraising is being coordinated by the  United Way of the Valley and Greater Utica Area.  Adam Lawless, Community Engagement and Marketing Manager for the United Way, explained the effort started almost immediately after the standoff ended.  He said a special “Unmet Needs Committee comprised of community leaders, elected officials, business owners, law enforcement and non-profit representatives” gathered to discuss ways to help the victims.

Lawless told CNYRadio.com and CNYTVNews.com that the texting keyword (that’s the word UNITED to 52000) was set-up by Monday morning.  He almost immediately started contacting local media outlets.  As you might imagine, Lawless said getting all the right people into the same place  “was a long process, and it took a lot of hours to make it happen.”  But, he said, “It was very fun to do.”

As events were unfolding last week in Herkimer, Lawless said, “we saw competition barriers come down.  It wasn’t about who had the best coverage or who got things out there first.  Everyone cooperated to make sure they were keeping the public safely informed.”  Some residents had to be evacuated.  Other residents and many local schools were locked down for hours, as the suspect remained at large.

Lawless said that he hoped this series of PSAs would once again have “everyone crossing those boundaries again, coming together to help neighbors in need.”  After plenty of phone calls, emails, and scheduling, it all came together:  Lawless managed to get a total of nine broadcasters, representing six different stations, along with the necessary production staff, to meet at WUTR’s studios on Wednesday.

All of the broadcasters appeared for the PSAs on their own time, and WUTR handled all the studio work and post-production at no charge.  Additionally, all of the stations and newspapers are donating air time and space to help spread the message, so in the end, there’s zero cost to the Valley Support Fund.  Even though it was a challenge to work out all the logistics, Lawless said in the end, “lots of people will be positively affected by the efforts put in by everyone.”

Again, you can donate $10 by texting UNITED to 52000.  If you’d prefer to donate by check, make it payable to “United Way c/o Valley Support Fund” and mail to the United Way, 401 East German Street, Herkimer, NY 13350.  Credit card donations are accepted over the phone at 315-733-4691.  To get more details about the fund, you can call that same number or visit www.unitedwaygu.org.

Our thanks to Adam Lawless for allowing us to “borrow” the United Way’s photos, and for sharing the “behind the scenes” story behind the making of these PSAs.

Whether it’s a recent happening inside your local TV or radio station, or a notable blast from the past, we’re always grateful to receive your photo (and video) submissions for our Picture of the Week feature!  Send those images to cnyradio@cnyradio.com or upload through the Contact Form.  There’s a new Picture of the Week right here, every Friday at 7:00am.