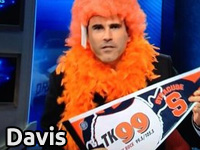 SYRACUSE — Before the NCAA men’s basketball tournament started, CBS Sports / Sports Illustrated analyst Seth Davis had predicted the 4-seed Syracuse Orange would be upset by 13-seed Montana.  Davis agreed to a friendly wager with local radio hosts Gomez and Dave, and when Syracuse won big, Davis made good on the bet, on national television.

During an interview on The Gomez and Dave Show, which airs mornings in Syracuse on TK99/105 (WTKW/WTKV) and in Utica on 96.9 WOUR, the two co-hosts promised to dress in Montana garb and videotape themselves jumping into an icy lake, if Montana had won the game.  But, if Syracuse won, Davis agreed he’ll wear an orange wig and wave an orange pennant on TV.

Syracuse’s 81-34 victory was one of the team’s widest margins in all of the years it has played in the NCAA tournament.  And, as you’ll see in the clip below, Davis lived up to his end of the bargain — and, being a good sport, he even added a little extra flair to the presentation.

Syracuse plays in the Round of 32, against 12-seed California, tonight at 9:40pm ET.  The game will air on TBS.